We need both! – coating accuracy and speed increase. What does a sealing process go for to improve productivity?

We interviewed the customers who had in fact installed YAMAHA robots. You can find tips that may provide solutions to your problem.

OEM production of engines is increasing in Japan and overseas.
Firm E was enhancing its production system to deal with this demand.

Keys to the issue

Is there any simple method to speed up the production while maintaining the coating (sealing) accuracy?

Firm E was reviewing the production system at the company level to enhance the production capability. Each department and process was expected to submit reports of results.

The sealing process studied a method to speed up the production process while maintaining the coating accuracy. The issue was closed in on one - to get both quality and speed. When coating along complicated lines like curves, the drive speed had to slow down to maintain the high locus accuracy. When coating simple lines such as straight lines, on the other hand, the drive speed needed to increase to shorten the takt time. For maintaining to dispense a constant amount of sealant, adjustment of the dispenser commensurate with the drive speeds was a must. Failure in this adjustment resulted in an instable amount of sealant, causing the sealant to form "DAMA (clump)", for instance. Since instable dispensing amount made all the products defective, the shop floor was reluctant to increase the dispensing speed.

Fine tuning between the drive mechanism and the dispenser counted on a skilled, experienced technician ...

"That the fine tuning was left to a technician made the issue even complicated", said Mr. S, the responsible person in charge. It is necessary to adjust both the drive mechanism and the dispenser to stabilize the sealing quality. This process not only takes time but also requires a skilled, experienced technician above all.
"Just a few limited technicians were able to do this particular adjustment. I never had peace of mind, thinking that an emergency situation, if happened, the line would stop." (Mr. S)

Speed up the production while maintaining the quality. We were troubled as we got neither one.

The optimal solution is found with a robot that traces the coating paths while adjusting the amount of dispensed sealant at the same time.

To gather information, Mr. S visited an exhibition center where he came across a demonstration at the YAMAHA booth. The exhibited "RCX340" for demonstration was a multi-axis robot controller capable of controlling two or more robots in a synchronized fashion. Interested in this particular product, Mr. S listened to a YAMAHA representative for detailed explanations for application of the product to coat with a sealant.

While observing and referring to the demonstration robot, a YAMAHA representative explained, "With an ‘RCX340’ robot installed, you can make it possible that the robot behaves while controlling the dispenser mounted on the robot so that it dispenses an adjusted amount of sealant commensurate with the robot moving speeds. After all, in no matter what situations the robot is in, it can maintain the amount of sealant dispensed on a product. You can save a lot of sealant that would otherwise be wasted due to failed dispensing."

With his instinctive feeling telling him that the robot had all what he needed now, he started planning the introduction upon returning to the firm.

With the support from the "Robot professionals", it was that simple to get both the speed and the quality.

Firm E went through a testing where they used actual products.
"Anyone could see that the production speed got obviously higher. I gave full score of 100 points to the coating quality, too. It was a really pleasant surprise that things can change this far and this extreme.", said Mr. S.

We also consulted YAMAHA about the dispenser adjustment that we had relied on experiences. As a result, we significantly decreased the man-hours that would otherwise occur.

Since the communications system is general-purpose, it can connect with a variety of devices. Collaboration and interlock with the existing facilities was smooth and convenient, making me feel we could introduce the system earlier for commercial manufacturing. This feeling of promptness and speed was also an important element for Mr. M to evaluate the YAMAHA’s proposal.

Confident of getting both the increased speed and stable quality, Mr. S and his project team members are now proceeding with verification to apply the robot to a variety of scenes such as possibility for workpiece changes.

Here’s a solution that gets rid of this issue.

The "RCX340" is a next generation multi-axis robot controller that helps build up high level facilities.

Cost reduction has no choice but going automatic ...
Robots that bring down labor rate by 60%

Challenge to width as narrow as "500 mm"
What makes it possible to lay out plural processes in a narrow width?

Reduce setup time by 80%.
Why does it take surprisingly short time to build up a robot vision system? 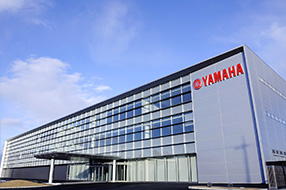