[ Click the buttons above to read reviews in other categories ]

Back to TOP PAGE

For the 2013 season, the Monster Energy Yamaha Team entered two riders in the MX1 class of the FIM Motocross World Championships (WMX). They were Steven Frossard, who ranked in 2nd for the 2011 MX1 season, and young Belgian rider Joel Roelants, who would be competing in his first full season of MX1. Here we review the Yamaha riders’ 2013 season, through which they fiercely competed on the “YZ450FM” factory machine, a race-modified version of the “YZ450F” with its fuel-injected engine that adopts a unique layout with forward-mounted straight induction and a rearward-slanted cylinder, mounted on an aluminum bilateral beam frame. 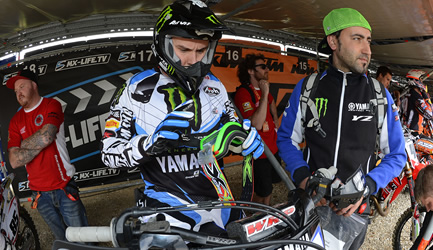 Racing through a full MX1 season for the first time, Roelants won a total of 265 points

The 2013 MX1 class of the FIM Motocross World Championships kicked off with the GP of Qatar in the Middle East. Everything in this round was new in this season opener, such as the easily-rutted track built in the desert, racing under the lights at night and the first-ever WMX “Superfinal” heats run together with the MX2 class (limited to the three rounds outside of Europe).
These completely new conditions brought uncertainty for the two Monster Energy Yamaha Team riders but they took the challenges in stride. Frossard took a fall in the first race, but in the following Superfinal, he moved up to an 8th-place finish that gave him 9th place overall. After the racing was done, Frossard said he did his best to recover but 9th was all he could do this time. But he added, “The season is very long and I know that race by race I will get better.”
As for Roelants, who had to learn to handle the high-powered 450cc machine among such tough competition, he managed to finish 15th and 12th respectively in the two races. These results gave him an overall place of 13th in his debut MX1 races.
The second round of the season was the GP of Thailand, and the first-ever holding of an MX1 race in the country. The Superfinal was again a night race, but unlike Qatar, the temperature here was well over 30 degrees Celsius with high humidity, making for very difficult conditions. While many riders suffered in this heat, Roelants showed big progress. After finishing 10th in the first race, he came back to finish 7th in the Superfinal and take 7th overall. He was smiling later as he commented: “I think I’m around 75% now, so to take 7th place is OK. If I’m fitter, then I know I can do better.”
As for Frossard, who was not feeling well before the races, he finished 9th and 8th respectively to finish 8th overall, one place behind his teammate Roelants.
After the round in Thailand, the MX1 class moved to Europe for round three, the GP of the Netherlands, where a dark cloud would fall over the Yamaha team. During the practice before the race, another rider collided with Frossard, cracking the metacarpal in his left foot and forcing him to withdraw from the competition at that point. Roelants also wasn’t able to perform up to potential, with small mistakes causing him to finish 14th in the first race. He managed to improve to a 10th-place finish in the second race, but that was only enough to give him a mediocre 11th-place finish overall. 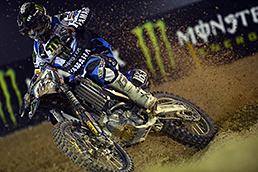 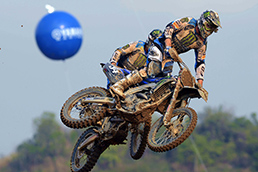 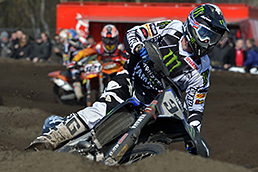 The Monster Energy Yamaha Team went into the next round, the GP of Trentino in Italy hoping to regain lost ground, but after trying a few laps in the first practice session, the injured Frossard decided that he had to call it quits. He was forced to take a long two months until late June away from competition to recover. On top of that, Roelants also took a fall during qualifying and injured his shoulder, taking both of the team’s riders out of the races. This ended any hopes by the team for a quick comeback.
Determined to fill the vacuum left by Frossard’s absence, the rookie Roelants fought bravely on alone. In the following races it was hard for him to break into the top ten, but in round seven, the GP of Brazil with its massive turnout of 45,000 spectators, Roelants put on a strong performance. In wet conditions he managed to finish 10th in the first race, and then in the Superfinal, he staged a fierce battle with the MX2 World Champion, Jeffrey Herlings. He finished that race in 12th place, giving him a credible 9th overall for the round.
It was round ten, the GP of Sweden held as the last race in June, that brought Frossard’s long-awaited return to competition. He started out impressively by winning pole position, showing that he had clearly recovered. Although he finished the first race in 8th place and dropped out of the second race after a crash, Frossard looked positive and confident after the races as he commented, “...I didn’t feel great out there but I’m happy with my speed and step-by-step I will be better. My confidence is there.”
However, the positive mood was not to last long as bad luck plagued Frossard again at the next round, the GP of Latvia. In a collision with another rider in the Saturday qualifying, he dislocated the index finger of his left hand. The failed qualifying left him to start from last position in the races and he was unable to finish either one. Then, in round 12, the GP of Finland, Frossard suffered a severe blow to his foot during qualifying. This injury would knock him out of the remainder of the season.
Newly recruited to replace Frossard for the GP of Germany, the 23-year-old French rider Milko Potisek immediately delivered promising results for the Yamaha team. After finishing 10th in the first race, he got a fantastic start in the second race to move into 2nd position in the early stages. But, his lack of experience showed as he allowed himself to be swallowed up in the pack before he could settle in and recover to an 11th place at the finish, giving him 9th place overall for his debut. A duly inspired Roelants also responded by pushing the limits of his physical strength to get the machine across the finish line in 6th in the first race and then, after a small crash in the second race, took a 9th place finish that gave him his best overall finish of the season with 7th.
This rookie pair of Roelants and Potisek continued to compete together through the ensuing GPs of the Czech Republic, Belgium and Great Britain, slowly, but steadily winning points and gaining experience. Their performances showed bright promise for the future. 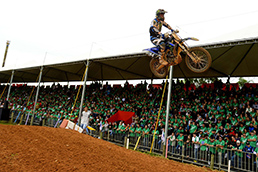 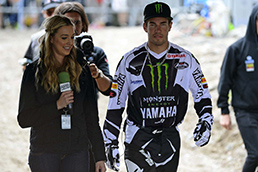 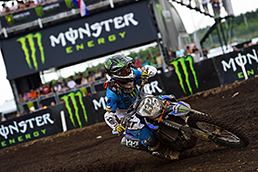 Although the efforts of the Monster Energy Yamaha Team had failed to get them among the top finishers, there were some impressive results from a privateer team mid-season. From round ten, Shaun Simpson of the JK SKS Gebben Racing team switched from another maker’s machine to a production YZ450F. The year before, Simpson had been a Yamaha factory rider and this was his third year competing in MX1. After getting used to his new machine, Simpson was placing higher than Roelants and Potisek in the Czech, Belgian and British GP rounds.
Finally, in the last race of the season, the GP of Benelux (Netherlands) at Lierop, Simpson got a fantastic start out of the gate in the first race to get in with the leading group, and went on to stage a fierce battle with points leader Antonio Cairoli. When Cairoli fell with two laps remaining, Simpson went on to claim his long-awaited first MX1 win. He followed this win with another great start in the second race, and although he took a fall mid-race that dropped him to 8th position, he recovered to finish 3rd and take the overall win. After the race he said with a big smile, “I changed over to Yamaha mid-season and I knew exactly how to set-up the bike from last year. This is definitely the best day of my career so far.”
Roelants also did well in this last race of the season by finishing 8th in the first race. This gave him a total of 265 points to rank 12th for the 2013 season. Due to his long absence because of injuries, Frossard ranked 22nd at the end, while his replacement Potisek ranked 20th. With the result of this final round and the points he had built up in the latter stages of the season, Simpson finished the year ranked 9th. 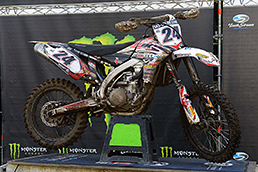 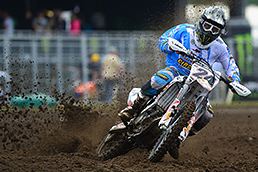 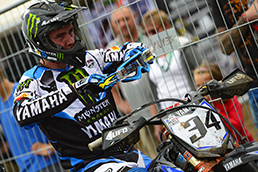