[ Click the buttons above to read reviews in other categories ]

Back to TOP PAGE

It was a tough season in 2012 for Yamaha riders Steven Frossard and David Philippaerts competing in the MX1 class of the Motocross World Championships, with both suffering injuries mid-season that kept them out of competition. But, new talent Shaun Simpson in his second full season of MX1 competition came through to perform up to expectations for the team. Here, we look back at the ups and downs of the 2012 season. 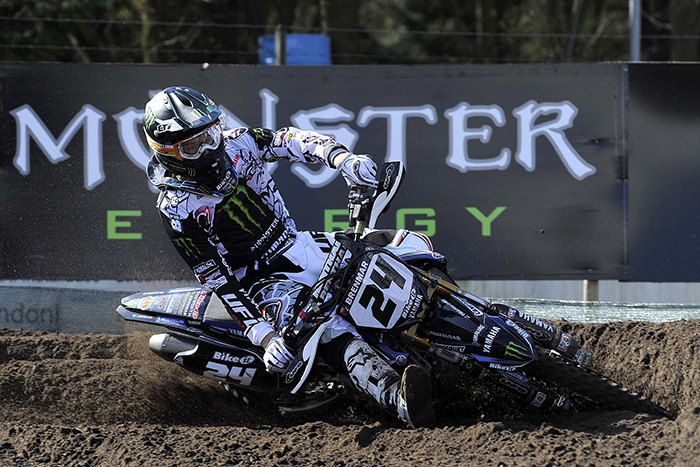 With Frossard and Philippaerts out for the season, Simpson fought valiantly on alone

After a strong start, injuries take Frossard out for the season
In the season's first half, Philippaerts shows signs of return to winning form

As in the previous season, the Monster Energy Yamaha Team entered three riders in the MX1 class for 2012. They were 2008 MX1 Champion David Philippaerts, Steven Frossard, who performed surprisingly well in his MX1 rookie season last year to end ranked an impressive 2nd and the young Shaun Simpson, who moved up to MX1 this year. All three rode the 2012 spec YZ450FM in the team's attempt to win back the championship title.
After his great performance last year, Steven Frossard was considered one of the top contenders for the 2012 title as the season opened. Frossard showed he could live up to those expectations in the season's opening round, the GP of the Netherlands. In the qualifying he battled for pole position with the class' defending champion, Antonio Cairoli (KTM) and in the first heat of the final he took the lead at one stage and ended in 2nd place. In the second heat, he won a hard-fought 3rd place to finish the opening round in 3rd place overall.
However, bad luck was waiting for Frossard in the second round, the GP of Bulgaria. After finishing 2nd fastest in both free practice and pre-qualifying, Frossard injured his knee in a qualifying heat and was unable to compete in the sessions after that. He ended up getting surgery on the following Monday. The next week at the GP of Italy, Frossard entered in the Saturday practice and qualifying heats but cancelled his entry in the Sunday race. It had been only five days since the operation on his anterior cruciate ligament and it was clear that he could not compete on willpower alone.
Meanwhile, David Philippaerts finished 7th in the first heat of the opening round, but he took a fall just after the start of the second heat and finished 11th overall. In the following round two, he took another fall on the second heat but managed to fight back to finish 7th overall. But he returned in round three to answer the cheers of his avid fans at his home GP of Italy with a strong performance. In the first heat he got caught up in a tangle with Clement Desalle (Suzuki) while running in 4th position and went down, breaking his goggles. On the last lap, he was unfortunate to have a rock hit his face but still managed to finish 9th. Despite an eye injury, Philippaerts ran in the second heat and ended up finishing the round 8th overall.
As for Simpson, whose goal had been a top-ten finish in the opening round, got a slow start in the first heat and finished 11th, but in the second heat he finished 8th and ended the round 7th overall. In the second round Simpson finished 9th overall, getting the season off to a favorable start. But in the third round he took a fall in the second heat and was unable to finish the race.
With 16 rounds of racing, the season was far from over. It was time to begin coming on strong to work back toward the top and former world champion Philippaerts was the first to do exactly that. In round four, the GP of Mexico, he collided with teammate Simpson and took a fall in the first heat, but still managed to finish 10th. In the second heat, however, he came back in winning form. From the start he pushed hard along with the leaders and finally took the lead with five laps remaining. From there he ran on to take his first win of the season. In the subsequent 5th round, the GP of Brazil, Philippaerts was 2nd in the first heat. In the second heat he took a fall shortly after the start but then fought back to finish the race in 6th. This gave him 2nd place overall, his best finish for the season.
For round four in Mexico, Frossard returned from his injury to finish 5th in the Saturday free practice. In the first heat on race day, Frossard got behind at the start and then began working his way up through the pack from 15th position. But, along the way his foot slipped from the footrest and hit the ground, worsening his injured knee and forcing him to retire from the race. He also had to cancel his entry in round five as a result. Two weeks later at his home race at round six, the GP of France, Frossard finished 8th in both heats, but after a doctor's examination the following day, it was decided that he needed a second knee operation. With that decision, he had to give up on the remainder of the 2012 season and begin working toward a recovery for the 2013 season.
Meanwhile, Simpson's fall with Philippaerts at the GP of Mexico resulted in a dislocated shoulder. Although he was able to finish 11th in the first heat, he was unable to compete in the second heat. In rounds five and six, he was not yet able to return to full form. At this point in the season, Philippaerts stood 6th in the standings and Simpson was 12th. 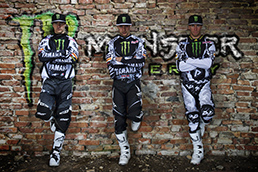 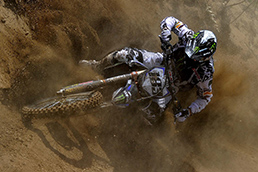 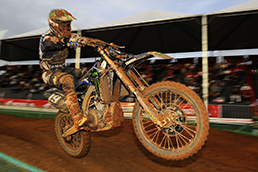 With Philippaerts out for the season too,
Simpson rallies for the Team in the second half

This would prove to be a season where each step forward would often be followed by misfortune. Just when it looked like Philippaerts was returning to his winning ways, he suffered falls again at round seven, the GP of Portugal, and round eight, the GP of Belgium, lowering him in the point standings. Then, in round nine, the GP of Sweden, he fell again in the first heat and injured both wrists just as he had the summer before. The diagnosis was bone breakage and the decision was made that he would return home for surgery. With this, Philippaerts had to give up hopes of competing for the rest of the season, just as Frossard had.
From that Swedish round, Simpson, now riding the full factory machine that had been prepared for Frossard, placed 4th in the qualifying and went on to his best-ever MX1 finish of 4th in the first heat of the final as well. In the second heat he was vying for 3rd position when he got caught in a long rut but still managed to finish 5th and thus scored his best overall finish of 5th. He was answering the expectations of the team with performances like never before.
Perhaps due to his youthful spirit, however, Simpson's performances tended to be inconsistent. After finishing 8th in both heats of the GP of Latvia in round ten, he fell in the next three races and was unable to improve on his 10th place in the standings. It wasn't until late in the season at round 14, the GP of Benelux that things took a turn for the better. The sandy Lierop course where this round is held is known to be hard on the riders, both mentally and physically, but Simpson was able to battle for 4th position early in the first heat. In the latter half of the heat he had trouble changing gears and ended up 8th. In the fifth lap of the second heat he rose to 3rd position and was able to finish 5th despite being bumped by back markers. He placed 5th overall as well in this round.
Again in round 15, the GP of Europe, he was vying for 4th position in the first heat and ended up finishing 5th when he was passed by Ken De Dycker (KTM) at the line. In the second heat, "it took [him] a bit longer to get in the rhythm" and he ended up finishing 10th in the heat and 9th for the day. At this point, Simpson stood in 10th position in the standings. He then went into the final round, the GP of Germany, with strong determination, knowing that his performance there could improve his place in the season ranking.
Simpson began by placing 4th in his qualifying heat. He hoped to take that positive momentum into the final races, but in the first heat he met with misfortune just after the start. At the first turn he got tangled up with Clement Desalle (Suzuki) and fell. Still, he didn't give up and battled on to finish the race in 15th. In the second heat he was going to try to make up for the first heat but had trouble with his timing getting out of the starting gate and got behind. In the end, he couldn't find his rhythm and only managed to finish 14th. Afterwards he said, "In the end I lost a place in the championship when I could have actually been two better. ... It was not a great way to finish the season because I'd been building up the last few GPs in a good way." With this, Yamaha's 2012 season ended with Simpson ranked 11th and a 5th place in the Constructor's ranking.
For the last two races of the season, 35-year-old veteran Josh Coppins, who had announced his retirement earlier, competed on the YZ450FM factory machine. He placed 9th and 13th in the GP of Europe for an overall place of 12th and finished 12th and 11th at the GP of Germany for an 11th place overall, bringing his MX career to a great finish. 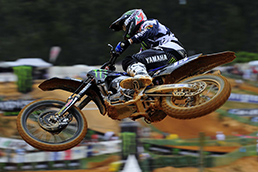 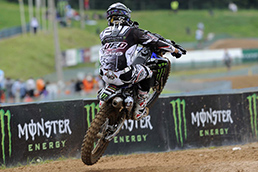 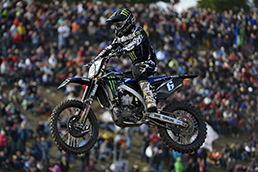