Owner’’´s manuals were the sole materials for development 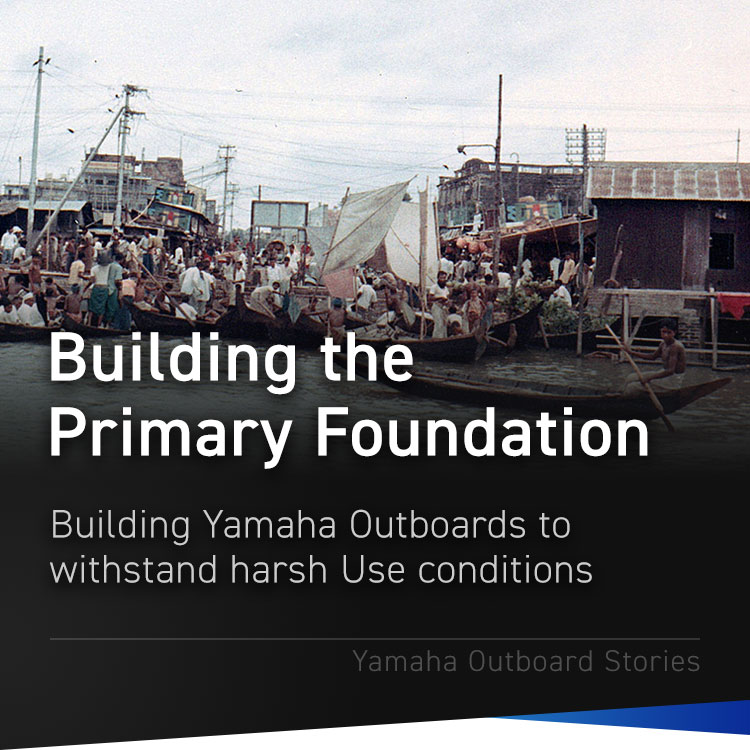 In 1967, President Kawakami had a meeting with Pakistan’s Ambassador to Japan. The ambassador told him that during the rainy season in Pakistan, the roads become so flooded that buses cannot run. Kawakami responded by saying that Yamaha manufactures outboard motors and that they might be of some help. That led to the start of Yamaha Motor’s venture into outboard motor markets overseas.

When Yamaha engineers first traveled to what was then East Pakistan (current Bangladesh) and saw the system of countless canals and extensive use of water transport in the country’s coastal region, what impressed them was the enormous potential demand for outboard motors. However, there were a number of high hurdles to be cleared before outboards could be introduced successfully. One of the most immediate obstacles was the shape of the country’s traditional boats. These were double-ender boats that could not mount an outboard without modification. After much trial and error, the new P125AK outboard was developed at the same time as a new type of boat that could mount an outboard and was tailored to the needs of the market. The potential this combination could offer drew high expectations in Pakistan.

That was not the end of the trials Yamaha faced for bringing their outboards to Pakistan, however. After the P125AK, the newly developed P250K outboard was introduced but was beset by mechanical trouble, causing a bevy of customer complaints. Yamaha Motor responded quickly by dispatching service technicians from Japan to survey the situation. What they saw was the extremely hard use the outboards were being subjected to. These outboards were commercial-use models, so if they broke down, this immediately and directly affected the livelihood of the owner. Having learned the seriousness of the situation, every time a problem occurred, the company was quick to send a team of engineers and technicians to thoroughly resolve the issues. This style of quick response in the field became the basic stance for Yamaha in the commercial-use outboard market, something that lives on today. These repeated efforts gave the users a feeling of assurance that Yamaha would always be there to solve any problems that arose, and that reputation soon spread throughout the markets of Asia. Also, these first exports of outboards to Pakistan built the foundation for an excellent service network that became associated with the Yamaha name worldwide.

By the 1970s, Yamaha was strengthening its relationship with emerging markets around the world. Yamaha outboards spread successfully to markets where American and European outboard makers had never ventured at the time. These included countries throughout Africa, Central and South America, the Middle East, South and Southeast Asia, as well as the islands of the Pacific, and in each of these areas, Yamaha continued actively conducting aftersales service.

However, there were many cases of outboards simply being left to rust away if they had broken down just once. That led to Yamaha sending technical staff to run service demonstrations, traveling from fishing village to fishing village to perform maintenance on the outboards being used in each region. There was no place in the world that Yamaha engineers and service staff would not go. In these regions, an outboard motor was an important asset and something vital to peoples’ livelihoods. In addition to providing service for Yamaha outboards, the service staff also worked to repair the abandoned outboards from other brands. Of course, the knowledge and experience gained from this field work was incorporated into new product development. In this way, Yamaha Motor gradually created a new category of commercial-use outboard motors, with the lineup broken down into spec variations to fit the exact needs and use conditions of each region. These refinement efforts are what led to the Enduro line of outboards that people love and depend on in their work around the world today.

East Pakistan (current Bangladesh) in 1967. There were many boats, but few were motorized.

A service campaign for the P165G conducted with local service mechanics in Sri Lanka.

The E40G model that was produced for the Indonesian market is still a long seller in the lineup today.