Owner’s manuals were the sole materials for development 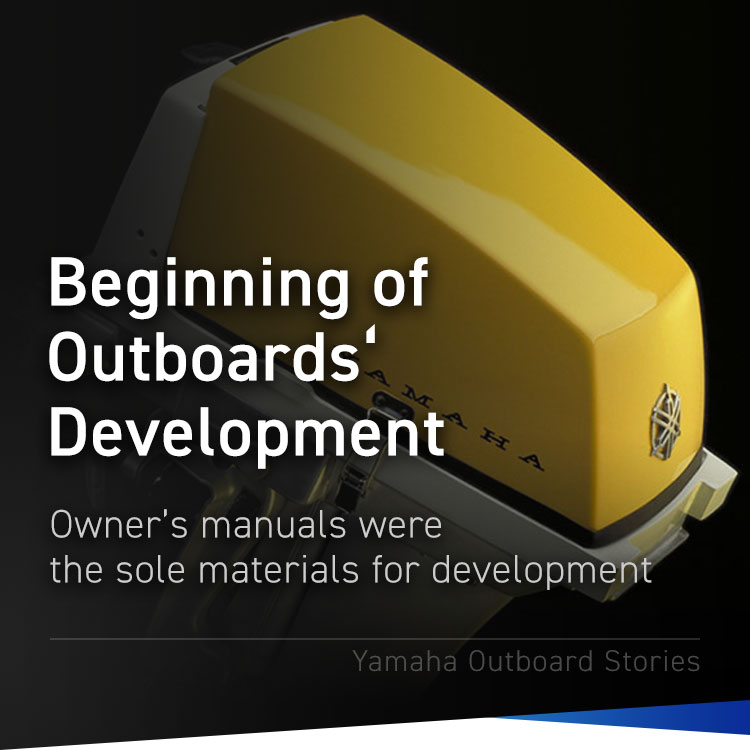 In 1953, Yamaha Motor founder Genichi Kawakami took a 90-day study and observation tour of the United States and Europe shortly after taking the post of president of the company. Multiple times on the tour, he saw people enjoying their time on the water and became convinced that marine recreation would someday come to Japan as well. After he returned home, Kawakami acquired a sailing cruiser to help better understand the key appeals of marine leisure by doing it himself, enjoying time sailing on Lake Hamana.

His cruiser mounted an outboard motor from a prominent American brand at the time, but it broke down frequently, so he switched to a Japanese brand instead. But he found that while it suffered fewer mechanical problems, its performance did not even come close to matching the American outboard.

That was what gave President Kawakami an idea; if an outboard like that did not exist, Yamaha should make one. At the time, however, Japan was only about to enter its post-war period of rapid economic growth. Electric home appliances had only just begun to enter Japanese homes, and the very idea of going out boating on the weekends never even occurred to most. President Kawakami knew that even if they succeeded in developing an outboard motor, they couldn’t make a business of selling them if there was nobody interested in buying them. So, he concluded that their sole target for the time being would be commercial use, such as fishermen seeing signs that they needed to begin motorizing their boats, and he directed development to begin.

The development team for the P-7, Yamaha’s first outboard, consisted of just two engineers. The story goes that at the start, the only information they were given to work from were catalogs and brochures of outboards sold overseas at that time. It was truly a case of relying on trial and error every step of the way. In 1958, they had succeeded in building a 250cc prototype based on the engine of Yamaha’s YD-1 motorcycle, but due to setbacks like breakage in the engine mounts, the project to build a marketable outboard with it was abandoned. At the time, the engineers were at work establishing standards for product testing alongside development, and they ran repeated 24-hour tests of the prototypes using the factory’s firefighting water reservoir as a makeshift test tank. The tests would run until something broke, then the engine was examined and a way was found to fix it.

In 1960, an outboard motor ready for the market was finally completed. It was released as the P-7, with a production plan of 200 units per month. This marked the beginning of Yamaha’s history with outboard motors.

However, the P-7 could by no means be called a top-notch outboard. It was noisy and vibrated considerably. As one of the engineers from that time recalls with a wry smile, “The fishermen that actually used it would sometimes sarcastically joke by saying, ‘It’s got...quite a sound. Nothing less from an outboard built by a musical instrument company.’”

It wasn’t until a year after the P-7, in November 1961, that Yamaha outboard motors began to be recognized and accepted on the market. That came with the release of our second model, the P-3, powered by a 63cc air-cooled single-cylinder 3 hp motor. It had been developed precisely for the needs of the growing commercial-use market, where 3 hp motors were the de facto standard.

Having been developed with a focus on engine durability and corrosion resistance, the P-3 was especially resistant to abrasion. This was thanks to the exclusively developed aluminum alloy it used, which contained silicon. It was also the first domestic outboard motor to use die-cast parts, helping achieve a lighter and more compact design. Special attention was also given to making the motor easy to start and operate.

Unlike the P-7, where development was conducted entirely by trial and error, the P-3 was developed and refined based on feedback directly from the market. It could be said to represent the first time Yamaha incorporated market feedback into a product. Whenever there were performance complaints following its release, Yamaha engineers would make frequent visits to dealers to hear about the issues directly, or straight from users’ mouths. They would then put that to use in finding solutions and making improvements.

As word spread about the P-3’s ease of use, it soon began to appear in increasing numbers in Japan’s fishing ports, where most boats had been powered by other brands. At one fishing town on the eastern side of Chiba Prefecture, it is said that it only took one year for virtually all of the port’s fishing boats to switch to Yamaha’s P-3 outboards. The outboard’s yellow powerhead—designed by a woman—resembled a hat, which led to the P-3 being affectionately called “Yamaha’s yellow hats” first by fishermen, and then by general users.

*This is a photo taken at the time. Always be sure to wear a life preserver while aboard a boat.