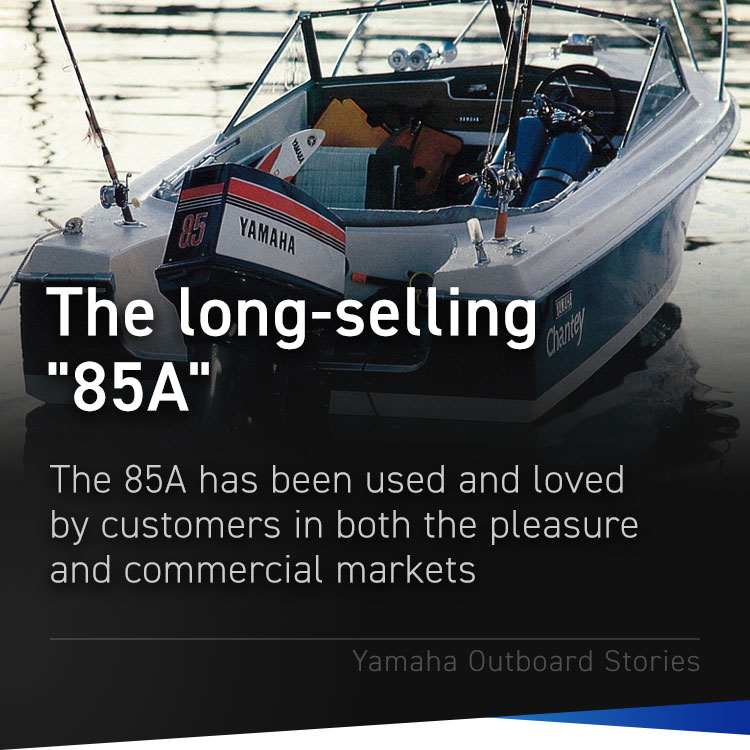 Since the launch of the first Yamaha outboards motor, the company's dedication to technological advancement and innovation has produced a series of models that set new standards of excellence for each new era. Of these many products of this Yamaha’s proud tradition technological innovation, there are a number of models that have maintained devoted followings of satisfied customers without changing in look or reliable basic design for many years. One of these models is the "85A" 2-stroke outboard.
The 85A is the oldest model in the Yamaha outboard lineup to continue to sell in its original form without being replaced by a new-generation model. When it was first released in 1978, it had the largest horsepower in the Yamaha lineup and was soon selling throughout the world. Customers loved and trusted this model so much that it is still selling today in about 100 countries and regions worldwide, primarily in the commercial-use market. In today's world, this is truly an amazing record that perhaps no other model will ever match.
It is also worth noting that the outstanding durability, reliability and performance of the 85A made its design and engineering the working base for a number of variations that appeared one after another.

Yamaha has been manufacturing the 85A to the same quality specification for more than 40 years. To this day it has a solid place in the Yamaha lineup and in the hearts of countless users around the world. That fact alone makes it a model that is unmatched in the industry. Since its release in 1978, the 85A has been used and loved by customers in both the pleasure and utility markets, with demand focused primarily in the commercial-use sector. It soon won acclaim for its tough, durable power unit, and that unit was subsequently used as the base engine for he sister model 75A. This was followed by the E75B variation specifically designed for commercial use with a recoil starter. The success of these models sparked calls from the market for more variations, eventually leading to the introduction of the E65A and E60A models.
For the pleasure-use markets, two more variations were added to the 85A-based lineup, namely the 55D and 75C. Further development of the line was seen with the release of the 80A and 90A featuring microcomputer control for the ignition system.

The prime reason for the growth of this family of models was the incredible toughness of the original 85A's power unit and its reputation reliability.
Its 3-cylinder block was designed as a single unit with the crankshaft that increased rigidity. This combined with the well-balance 120-degree crank to produce an extremely smooth-revving engine character with minimum torque fluctuation and vibration.
This smoothness also reduced lower unit trouble by minimizing shocks to the gearbox, thus making the 85A and its family of variation models highly reliable outboards overall.
Each of the three cylinders in the power unit is fitted with a separate carburetor that function with the Capacitor Discharged Ignition (CDI) system to deliver more stable power development. The power unit was also designed for easy servicing and maintenance, which won the praise of mechanics everywhere. Furthermore, the lower unit was designed to accommodate propellers of up to 14 inches in diameter, thus allowing users to outfit their models for a wider range of uses, from light, high-speed boats to heavier boats.
This unmatched universality and the inherent high power output and reliability of the 85A are the reasons why this "masterpiece of engineering" is still being manufactured and sold to customers that know and love it worldwide.