The UK's top two F1 drivers swopped their McLaren MP4-26 cars for stand-up jet skis in a race challenge organised by BBC Sport in the run up to the recent Silverstone British F1 Grand Prix.

Former F1 world champions Lewis Hamilton and team-mate Jenson Button, who won their F1 titles in 2008 and 2009, were challenged to race against the clock around a purpose made course in London's docklands on Tuesday 28th June. The challenge was to beat BBC Sport TV personalities and former F1 races David Coulthard and Martin Brundle by setting the fastest lap around the course on a stand-up Personal Water Craft.

Results of the race challenge were closely guarded by the BBC until the final film of the event was broadcast shortly before the start of the British Grand Prix on Sunday 10th July. Millions of viewers watched as the F1 stars took up the BBC's challenge and held nothing back in their efforts to win the event.

Brundle and Coulthard had arrived early on the day of the race to practice their stand-up ski riding techniques on Yamaha Superjets before riding full race spec "F1" turbocharged stand-ups loaned by racers Lisa Barsby and Jim Goodchild. But even with the extra practice it was soon obvious that Hamilton was going to be the man to beat as he was immediately fast on the race spec machines.

And it was Hamilton that went out first to set his race lap time recording a best lap of 45.9 seconds. Coulthard went next and despite a massive effort which ended in a spill he could only manage a 51 second lap, while Button's efforts came to an early end when he clipped a marker buoy and retired. Canny Martin Brundle knew that he couldn't beat Hamilton on the stand-up skis and saw an opportunity for a gamble, betting Hamilton that he could better his time. Little did Hamilton know Brundle planned to use the Yamaha VXR instead of the stand-up ski so accepted the bet. 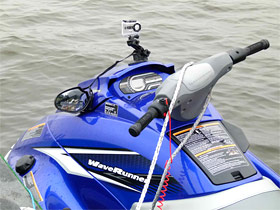 The BBC hastily fitted cameras to the VXR and Brundle was off, immediately proving fast on the 1800cc VXR and making the most of the machines light weight and nimble handling to set a lap time of 42.7 seconds. However Hamilton, ever the racer, branded Brundle a cheat for not riding the stand-up and immediately swopped to the VXR himself to see if he could better the new time.

The BBC continued to film despite the fact that the script had now effectively been thrown away and the race was on to set the fastest lap. Incredibly Hamilton was able to shave a full second off Brundle's time recording a stunning 41.7 second lap and exploiting all of the incredible performance of the VXR to emerge as the overall winner, showing off his natural abilities and extraordinary reflexes and confirming why he is arguably the most exciting driver in the F1 championship today.

Yamaha Motor UK would like to acknowledge the support of the following in the making of this film: Lisa Barsby, Jim Goodchild, AquaX, Tereza Joanne Jet Ski club, Jack Moule and the RYA who provided support boat cover for the event. ENDS.