On the 21st of April 2010, six intrepid South African sports personalities set out an historic adventure that would see them travel over 2,800 km of treacherous coastline in over 3 weeks on their trusted Yamaha FX HO WaveRunners, all in the name of Cancer awareness and support under the auspices of the Cancer Association of SA (CANSA).

The journey of a thousand miles, 1,511 nautical miles to be exact, began at the border near Ponta De Oura in Mozambique then trailed down the East Coast of South Africa and around the Cape Peninsula to finally reach Alexander Bay and the Orange River mouth, the border where South Africa and Namibia meet.

The 6-strong team of some of South Africa's most well loved sports celebrities consisted of Lance Klusener (SA cricketer), Jason Ribbink (SA surfer and big wave rider), Brandon Ribbink (World Lifesaving champion), Barry Lewin (SA / International surf ski paddler), Russel Symcox (KZN provincial cricketer and son of world famous SA cricketer, Pat Symcox) and finally Mark Addison (marine conservationist and shark expert). Some of the expedition legs measured as much as 315km without interval and the team experienced a paradox of conditions from sublimely serene to giant squall-like swells. Thankfully they underwent weeks of rigorous training and had the complete backing of their Yamaha craft to go the distance with them. 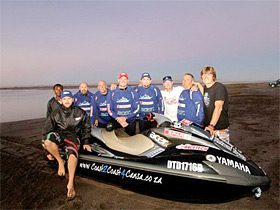 Using their stardom to harness the support of the South African public, the team had various stop over points where they would meet and greet fans and rally the support of the local communities in the fight against Cancer through sms lines, fund raising activities and general awareness clinics. At the onset of this mammoth undertaking, critics were wary of the ability of the watercraft to make the long haul journey especially in such unpredictable conditions, but the unflinching performance of the Yamaha WaveRunners silenced them all.

The performance of the Yamaha FX HO WaveRunners in the momentous expedition has gone a long way to solidify Yamaha's reputation of their unparalleled reliability not only in South Africa but the world at large.