Japan's mainland is made up of four islands. Among them, 'Kyushu' located in the southwest of Japan is a very beautiful land blessed with the natural beauty of oceans and mountains and with a unique culture. This time we toured to find out more about the attractiveness of Kagoshima located in the southernmost reaches of Kyushu.

The marine leisure facility, Iso Marine, located near Kagoshima-city was our starting point this time.
Unfortunately it was in the middle of the rainy season, and we had dull weather the day before. We prayed for the weather to get better but it looked like rain the whole time on the day of the tour. Ten boats participated this time and 14 people gathered. One drove over 1400km to join us.

We left Iso Marine House, where we had great help beforehand accommodating participants' crafts and with preparation, and headed out for our first goal, Sakurajima.
Sakurajima is an active volcano looming out of the bay across from Kagoshima City.
Its altitude is 1,117m. It had several large-scale eruptions in the past and continues to have small scale eruption every now and then. The smoke was roiling up as usual and volcanic ash lightly piled up on WaveRunners that had been sitting on the beach since the day before.

We took a commemorative photo with Sakurajima in the background with smoke coming up as usual. Unfortunately we couldn't see the mountaintop but the scenery with lava rock showing above the surface clearly told the tale of Sakurajima.

After taking photos at Sakurajima, while enjoying scenic views of Kagoshima bay and cityscape, we headed out for Hirakawa Marina where we had lunch and a fueling break.

Hirakawa Marina is one of the few marinas nearby. Since the marina had a beach we beached the WaveRunners. It was a little early for lunch but since we started early in the morning we offered participants lunch. It started raining during lunch break but we headed out for the day's main event, Kaimon-dake. 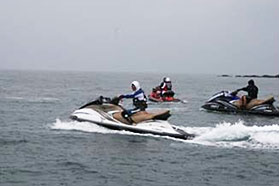 Kaimon-dake is an active volcano located in the very south of Kyushu and is famous for the elegant line of its cone and for its sea coast. Touring participants were looking forward to viewing scenic Kaimon-dake from the sea.

Unfortunately it started raining for real. Everybody sank into a mood of half-giving up as we headed south.

We all continued to head south, catching a view of Kiire oil storage base on the right where a giant tanker was at anchor, but it was still raining. Then, Wow! As we neared Chirin-island, the sky, though only a little, begun to open up!

Suddenly our hopes were raised and we headed out for Nagasaki-bana located on the southern tip of Satsuma peninsula. Then we all turned toward Kaimon-dake....

...and the sky was blue! By the time we reached Kaimon-dake, it was blue sky as far as you could see!! It's times like this when we're glad that the weather forecast was wrong.
We all had free time to enjoy ourselves with the views of a clear cobalt blue sea and the magnificent scenery of Kaimon-dake in the background.
Participants had a great time moving in toward Kaimon-dake, taking photos and just floating on the sea.

With a feeling in our hearts now that the trip was worth it, we headed towards the next point, a strangely shaped rock island called Tobi-no-Kuchi. 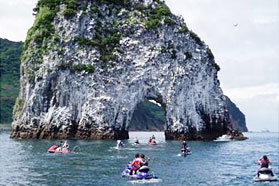 The whole island has become one giant sea bird's nest and bird droppings painted its rock surface white. We rode through the cave tunnel and, since it was a calm sea, we could go through without any worry. 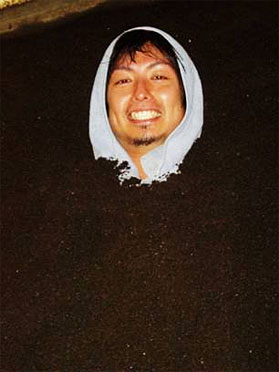 This area is studded with volcanoes and famous for its hot springs. In some areas of Ibusuki beach, if you dig out the sand, you may find a bubbling hot spring. The hotel we stayed in had a sand bath which is another Ibusuki specialty. It is a very healthy facility where you can be covered with geothermally heated sand and sweat up a storm.

After we relieved the day's fatigue with the sand bath, the long-awaited dinner time arrived. We had a blast drinking Satsuma Shochu (alcohol) and snacking on local delicacies like pond herring sashimi and Satsuma-age (fish tempura).

The second day started with thunderously bad weather. It was a heavy downpour like a waterfall accompanied by lightning and thunder; we had a discussion and decided to cancel the tour. Since participants had left their cars at the starting point, they had to leave their WaveRunners at the berth and move back to Kagoshima. Trains were also stopped due to the heavy rain so we had to ride local buses which were the only public transport available.

The owner of Iso Marine House where we started our tour the day before gifted us with jumbo rice cakes, another local dish.
We were only able to tour for a day, but we were able to enjoy Kaimon-dake when we had almost given up. It was a tour that made us realize how profound and difficult it is to hold an event with Nature as your partner.

The participants, who must have been more tired from the unexpected bus tour than from the touring, got back on their feet and headed back home after dismissal.
I knew WaveRunner fans were in good shape!!