On October 17th, 2018, 21 skilled technicians from 19 countries and regions gathered together at the Yamaha Motor headquarters in Japan to take part in a heated battle to become the world's No.1 Yamaha motorcycle technician. The technicians who stood at the top of approximately 34,000 competitors spread throughout the world were Brett TR Hart from Canada (Sports Model Class), and Wu Chang Wei from Taiwan (Commuter Model Class)! Congratulations to you both! 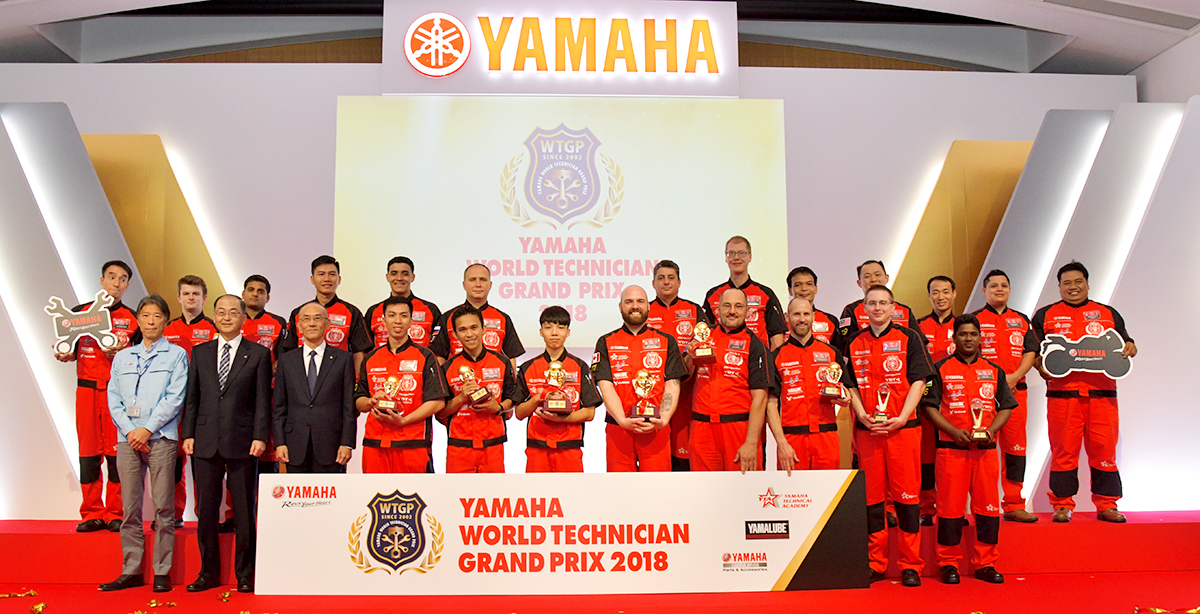 I did everything I could and thought I did well. However there were so many skilled technicians around me, so I never expected to win. I'm so happy that my dream has come true.

I came in second, but I am satisfied because I did as much as I could. It is something to be proud of. I would like to thank Yamaha for turning their attention to all technicians and providing us with this amazing competition. I would also like to say thank you to everybody who was involved in organizing the competitions.

It was a great competition. I was very glad to have taken part in such a wonderful competition. I'd like to say thank you to Yamaha.

I love motorcycles since I was a child, and I believe that this is the result of the hard work with my father. He took part in a previous WTGP and came in second, so I am happy to have surpassed my own father and won the championship.

I am glad to win the 2nd place. I was very nervous during the competitions, but everything went well by advancing the task step-by-step.

The competition was a gathering of professionals, and it was a wonderful experience for me. When I return to Vietnam, I don't just share the experience with my work colleagues, also want to improve everybody's skills together.

Technical skills are brushed up by practice, but I believe that customer relations skills do not come from practice, but are evaluated on the results of daily works. It was a pleasant surprise to win the CS award, and I 'm very happy with it!

I am happy to be here. I would like to thank YTA who supported me all the time. I want to make the best use of my experiences here and share them with many customers in India. I am glad to have learned a lot of things.

The opening ceremony of the Yamaha World Technician Grand Prix, which is held once every two years to determine the world's No.1 Yamaha motorcycle technician, was held on the morning of October 17th, 2018. The venue was filled with people such as media and families who came to support the contestants. The hall broke into a huge welcome when the twenty-one contestants from nineteen countries and regions appeared on the specially-installed stage. The contestants' pledge of fair play was then made by Indian and Japanese contestants of the 2016 champion countries. And at last, the time has come to begin the competitions.

All contestants were divided into two groups, the Technical Skills Competition and the Customer Relations Competition started at 10:20 am. Each contestant was assigned an individual booth for both competitions to ensure that the other contestants had no idea of how things were going. The progress of their work was displayed on a monitor in real time. There was a large audience composed of family and various media. It was a tough situation for all the competitors to show their usual high capabilities as they usually work with no attention. So it was important to deal with this unfamiliar situation without being too nervous.

The Technical Skills Competition is a practical competition. They must inspect and repair the faulty motorcycle first, and then check each component and part in accordance with the periodic maintenance list.
The event lasts 80 minutes, and the technicians can score up to a maximum of 100 points. These faulty motorcycles they were assigned had immovable engines. For troubleshooting, they have to perfectly use Yamaha Diagnostic Tool (YDT) which is a fault diagnosis tool that allows you to find faults quickly and accurately by connecting a computer. The contestants who repaired the engine first during the morning session was Dinh Khac Quy from Vietnam, and during the afternoon session was Wu Chang Wei from Taiwan.
They were required not only to repair the faulty engine but also to show the reasons for judgement of failure. Also, they were judged on whether they can handle the tools, equipment and customer's motorcycle correctly and carefully. In addition to the engine trouble, we also concealed a problem with the brakes to set a scene in which the repair work was not completed simply by getting the engine started. The main point of this year's Technical Skills Competition was to make sure that the technicians paid close attention to the motorcycles right through to the end without letting down their guard.

The Customer Relations Competition provides a scenario in which the customers return to pick up their motorcycles after the inspections and repairs have been completed, and the contestants are required to explain the results of the inspections and give the customers advice about their motorcycles. They are naturally expected to provide careful explanations on the inspection results, but the main point of this competition is to determine how much additional details they are able to provide and whether or not they have the repair skills and communications skills required of Yamaha motorcycle technicians in order to achieve our One to One Service philosophy.
They have also checked their appearances and their way of talking and so on by the special judges proficient in culture and language of each country.
Several contestants earned high scores with only a narrow margin between them, but the contestant who earned the highest score in the competition was Ardhi Sulistyo Haryo Prakoso from Indonesia. Not only did he provide clear explanations on the inspections and repairs, but he also impressed the judges with his excellent communication skills as he answered the customer's questions.

The families who supported the contestants

Family members from all over the world came to the WTGP 2018 to cheer on the contestants as they stood in the spotlight.

The award ceremony was held after all contestants had provided their best to honor their vigorous efforts.

The chairman of the World Techinician Grand Prix, Yoshihiro Hidaka, president and representative director of Yamaha Motor Co.,LTD. told the contestants, "I expect you to take this experience with you, and to lead other technicians around the world, showing your skills and demonstrating what it means to be a model Yamaha technician. I also expect you to keep trying to improve both your technical skills and your customer relation skills so that we can further increase the number of Yamaha fans worldwide." 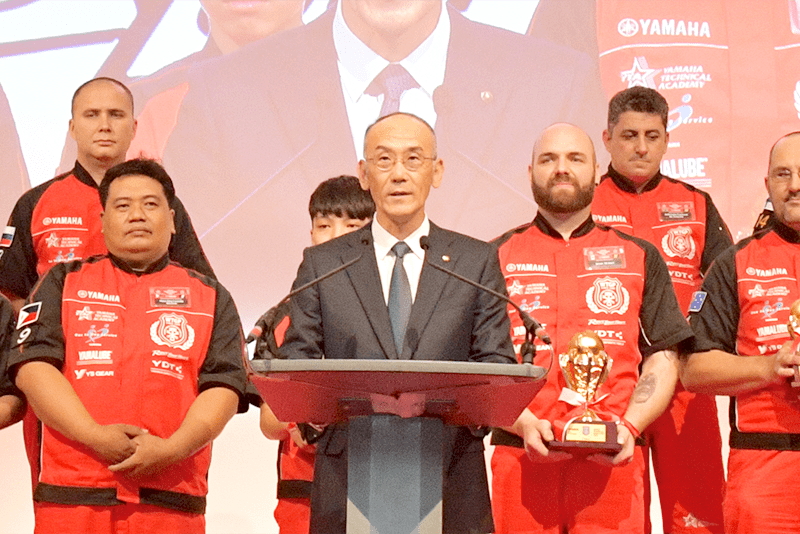 The sports model class for advanced countries, including Japan. The winner was Brett TR Hart from Canada. His boss came to cheer him on, and both showed their delight with a huge hug when the results were announced.
The second place was Darren Stout from Australia, and the third place was Alan Simmonds from the Netherlands. 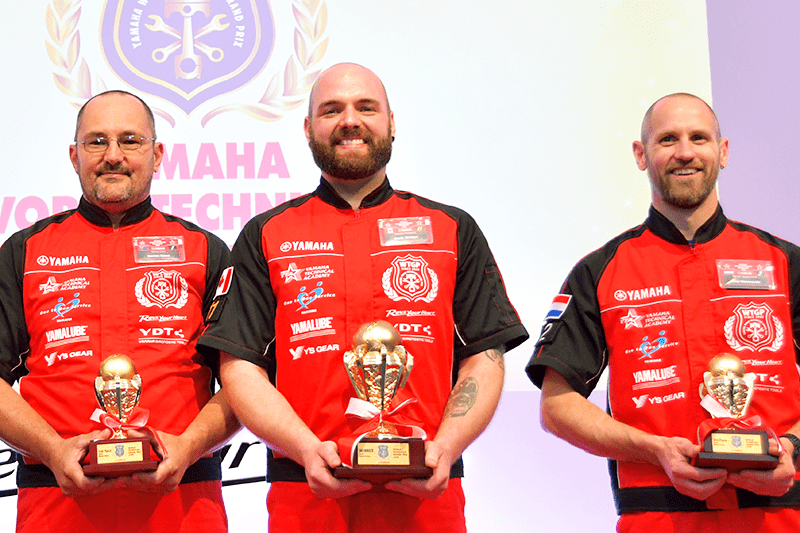 The commuter model class centered around Asia, ASEAN nations and other emerging countries. The winner was Wu Chang Wei from Taiwan. Wu Chang Wei is one of the youngest contestants at 21 years of age, and his father showed his own skills by coming second in the WTGP 2005. A dream has come true for two consecutive generations. The second place was Ardhi Sulistyo Haryo Prakoso from Indonesia, and the third place was Dinh Khac Quy of Vietnam. 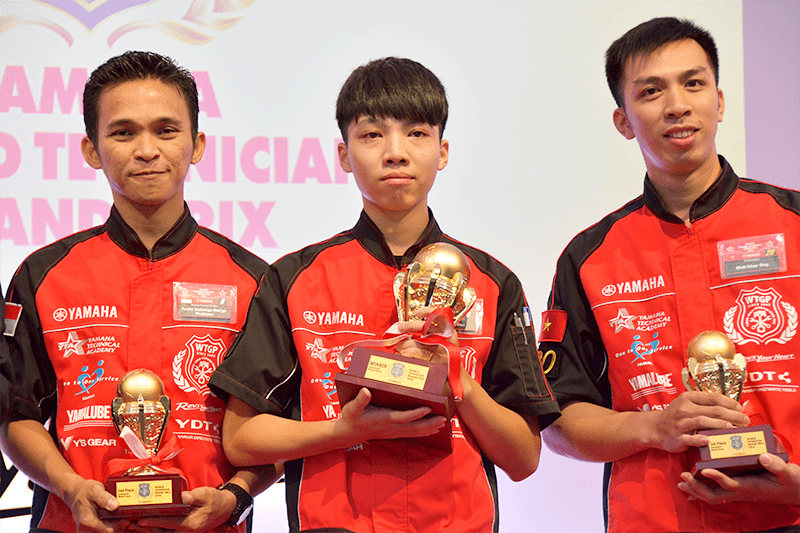 This is a special customer satisfaction award based on the level of etiquette and good manners shown when dealing with customers, and the care shown in handling customers' motorcycles. The contestants selected for this award were Jeremy Leigh Talley from the USA, accompanied by his fiancée, and Sekh Tazim from India, who trained harder than anybody else while withstanding the pressure of a potential third consecutive win. 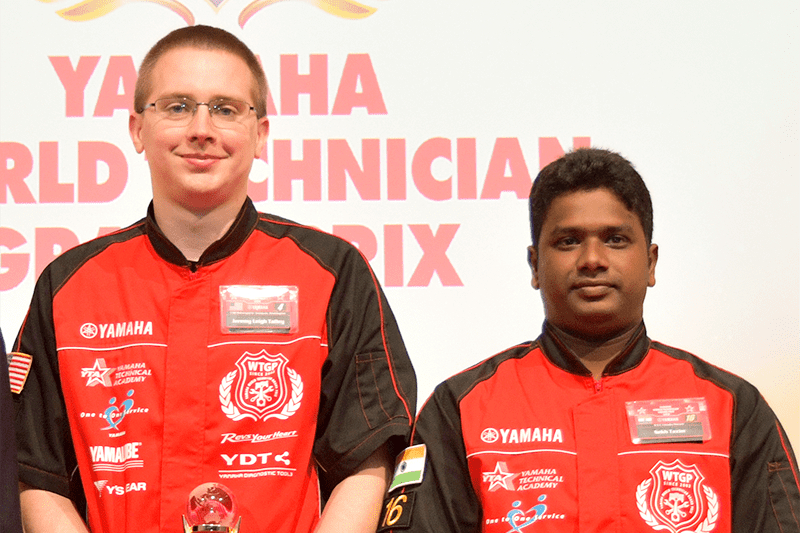 The next Yamaha World Technician Grand Prix will be held in 2020. We look forward to discovering if the winning nation can score another win at the next competition, or whether another country will climb to the summit. Also, our service staff consisting of approximately 34,000 certified YTA technicians spread throughout the world and all other employees will strive on a daily basis to offer our customers a unified level of high-quality service at dealerships in every country. We hope you will try the high-quality after-sales services we offer for yourself at your local Yamaha dealership.