Want to deliver safe water to people around the world

I jumped into this project with a strong desire to contribute to society and enrich the lives of customers in developing countries, not to serve them, but to aspire to them. I wanted to enrich the lives of customers in developing countries.
First introduced in Africa in 2011, the Republic of Senegal in West Africa. Since then, the introduction of this system has been promoted mainly in rural areas in developing countries. That's our workplace. Experience there is still a source of growth. I experienced many other events, including difficulties communicating because I did not know the official language or local language of the local area, installation work with the local people working hard in the hot heat of more than 45 degrees Celsius, and almost breaking feelings as solar panels and parts were stolen. Nevertheless, the moment people are present at the site where they are happy to hug each other when clean water comes out for the first time is a priceless experience.

Even today, I am working to improve equipment and construction methods by making use of this experience in the market. It's not all about fun things, but I always imprint on my heart the words from my senior colleague, "Don't give up in any situation, do it all the way to the end." I will continue to be at the forefront in order to pass on to the next generation the DNA I have cultivated through all my experiences, connections with people, and words from seniors.

Memorable task that has helped me grow myself

Between 2012 and 2013, my work in installing a YCW in the Islamic Republic of Mauritania in West Africa helped me grow a lot. Looking back on those days, I feel that the experience I had done well is the cornerstone of my current self.
A year before that, in 2011, the first YCW in Africa was introduced into a village in the suburbs of Saint Louis City in the northern part of the Republic of Senegal. It became a very bitter experience. I suffered from the nine-hour time difference from Japan, which I experienced for the first time, and the language barrier was higher than I imagined, and the heat and fatigue overlapped, and I fell ill. Until then, the self-confidence that had sprouted while experiencing several operations in Southeast Asia broke. In addition, I made a fatal mistake in the introduction process, which led to a situation in which I was forced to shut down the equipment for a while. Not only did I cause trouble to the local residents, but I was severely scolded by my boss.

The following year, I was assigned the task of introducing a YCW in Mauritania. I felt like my boss gave me a chance to recover. In order to meet that expectation, I made careful preparations so as not to repeat the same failure again. The Islamic Republic of Mauritania has a land area approximately 2.7 times that of Japan. Most of the area is desert, and the capital, Nouakchott, is a large city in the desert. The race is predominantly Arab-African, and the atmosphere is quite different from Senegal on the south side across the Senegal River.

The country has a vast land area, but at the time it had a total population of about 3 million people, about one-third of which live in the capital. I had the impression that once I walked out of the capital, the desert area spread so far that it was difficult to see the residential area. The building suddenly appeared in elementary school on the road that ran along the national road. Children were studying, but there is no private house nearby. Just by looking at the environment around the school, I was able to find out how tough they were living.

About 300km south of the capital, a wetland extends near the border with Senegal. Diawling National Park. The mission is to install a YCW and a Photovoltaic (hereinafter referred to as PV) generator in the residential areas of the Mauritanian government and neighboring villagers who manage this national park. This area is a non-electrified area with no water supply facilities. The residents either drink water from the Senegal River or go to a city on the Senegal border about 30 minutes by car to fetch water. The Government of Mauritania will use the Government of Japan's ODA budget (Grant Assistance for Grassroots Projects) to introduce our equipment. We will responsibly introduce a set of equipment to supply purified water that meets the country's drinking water quality standards. The project started with great anxiety.

Staying itself is a challenge before work. There is a world that can be seen by putting oneself in the same environment as the villagers.

Our workplaces are areas where access to safe water is difficult, and water infrastructure is not in place in the first place. Moreover, the majority of them are non-electrified villages. There is no hotel in Diawling, and I stayed in a building where guests sleep.
Of course, there was no clean water, so I washed my body with water from the river. There was also no toilet. There was electricity from a tiny solar panel, so my mobile phone and camera could be recharged. However, there was no fluorescent light, and with sunset, the interior was enveloped in darkness. I was always in the mosquito net when I was in the room. Getting malaria is the greatest risk. I spent the night terrified by the sound of mosquito wings.

For dinner, a staff member came to call me in the dark, using a flashlight, and took me to the dining room. Whether it was a dining room, it was a large room with a set of mat. There, the firefly lights were dimly lit up in the room. Rice and meat placed on a large plate were wrapped in one knee with several people, and eaten all at once. They didn't start eating until everyone was present. That was the rule. Sometimes they started eating after waiting for me to sit down. At this time, I felt that government officials treated me not only as one Japanese, but as if I were their family. I was given a spoon, but the staff ate with their right hands. When I refrained from eating, I ate the meat they had shared with me. The meal was very delicious. I decided not to worry about the details of what water is used to make the dish. If you care about it, you can't work in this environment.

Construction work was a series of unexpected events. It was a strange feeling, but I enjoyed it.

I was instructed by my boss to look at the foundation work from the start to the completion. I spent every day to check the dimensions one by one with the contractor at the required places to see if the contractor constructed it according to the drawing. I saw the completion and returned to Japan temporarily. Then, after confirming the estimated arrival date of the container ship carrying YCW parts in Mauritania, I left for Mauritania again. Finally, the installation work of the YCW itself began. Work cannot be done by myself. The installation work included not only local villagers and government officials, but also three Senegalese villagers who helped with the construction when we introduced a YCW to a village in Senegal in 2011. When I was placed in an environment where English was not spoken, I had no other choice but to express my thoughts using only a few words of French, Arabic, and gestures. But this was surprisingly fun.

The installation went smoothly as careful preparations had been made in advance. An unexpected situation occurred here. The container vessel carrying PV equipment was destinated for the port of Senegal instead of stopping at the port of Nouakchott. This delayed the initial schedule by two weeks. Therefore, I was forced to extend my business trip. By the time I was able to complete the assembly of all the PV equipment, my stay was longer than a month, so I temporarily returned to Japan.

Two months have passed since installation began. As the end of the year 2012 approached, I went to Mauritania again in December. Before going to Diawling National Park, I visited the Embassy of Japan in Mauritania in the capital to greet the Ambassador. At the meeting with him, it was reported that a large-scale fire was occurring in the vicinity of the Senegal River. I went to Diawling, with great anxiety. The site had changed much from that of the previous world. A flame caused by illegal fishing in the Senegal River caused a large area of reed wetlands growing in the Senegal River. A scene with nothing but the expression of a burnt field. The water of the river was discolored to the color of charcoal due to that affect. Fortunately, the intake pipes and pumps did not burn, nor did they affect private houses. To me, who is shocked, the officials are not your fault (of course!). He encouraged me by saying that time will solve the problem.

I had finished the rest of the assembly and watering, praying that the water of the river would gradually get better, which I certainly couldn't do anything about. Several months later, the water quality of the river also recovered. The water purified by the YCW was able to get the drinking water permit by the public organization. This finished my mission.

Participation in the handover ceremony in August 2013

Originally, my mission ends with this. It was usual for an executive general manager from us to attend the handover ceremony of equipment attended by the Japanese Ambassador on behalf of the Japanese government. This time, the company executives appreciated what I did alone, and I was allowed to attend on behalf of them. A grand ceremony was held with the attendance of high-level officials, including the Japanese Ambassador, the Deputy Minister of the Environment of Mauritania, and the mayor of the local city. I gave advance preparations for the ceremony and explained in detail the mechanism of the water purifier to the VIPs.

Even before the ceremony was held, officials and local residents who had already managed the park had already used the purified water obtained from the YCW. Considering that they used river water for drinking and cooking in the past, that was probably too much of a change. When I saw the children drinking water with smiles on their faces, there were many difficulties, but it was the moment when I myself felt happy that my work would lead to the smiles of the children. Though it was only a tough time, that experience, which I think was fun when I looked back on, made me grow myself a little bigger.

We want to deliver safe water to all over the world, and we are committed to doing our work with that in mind. Through a series of operations in Mauritania, I was able to train my ability to solve various unexpected problems and my spiritual ability to get through. In addition, I was able to learn anew how important it is to prepare in advance. I think my boss wanted me to learn a lot of things through this work in Mauritania. We have to experience both failure and success ourselves. I vow to my heart that I shouldn't make the same mistake because I experience it myself, and I create the motivation to make it a success next time absolutely. The passion for work is the same, and by knowing and experiencing the scene, one can continue to burn passion.
In SDGs, the SDG6 is for everyone to have access to safe water by 2030. By providing safe water to as many people as possible, we will continue to be at the forefront of our efforts to provide new inspiration and abundant lifestyles. 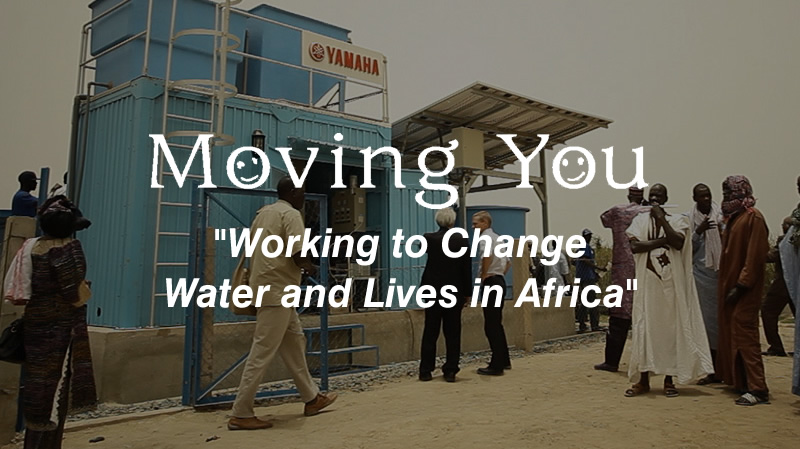 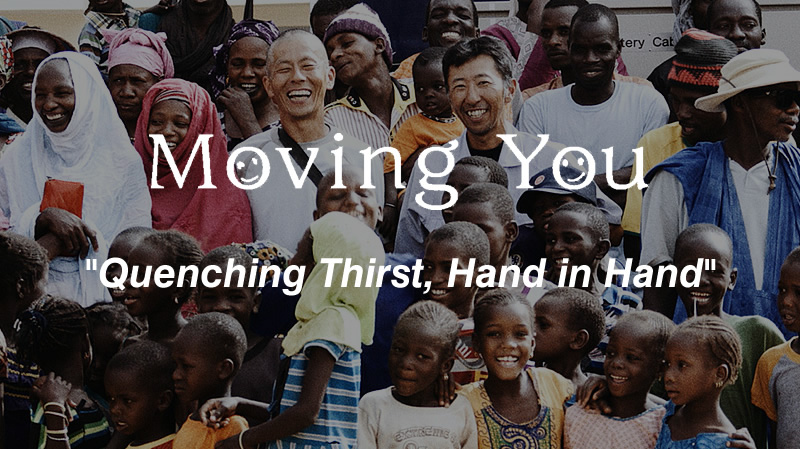