The FZ750: Opening a New Era of Yamaha Handling

Having expanded and solidified the Yamaha Handling reputation in the 4-cylinder supersport bike category with the XJ650, Yamaha Motor scaled up the engine’s displacement and released the XJ900 as its entry in the emerging era of bikes with bigger displacement. This was followed by the even larger FJ1100, as Yamaha took on the challenge of establishing its position in the over-1-liter [1,000cc] category. The most influential element in evaluating big-bike performance in Europe was very-high-speed cruising on highways like Germany’s Autobahn, and Yamaha’s aim was to offer a bike with arrow-like straight-line stability down these highways. It was here that Yamaha first experienced developing a supersport bike with 16-inch wheels front and rear. At the same time, Yamaha was starting development of the FZ400R with a 16-inch tire for the front in response to the “racer replica” boom that had begun to take off in the Japanese market. While the other Japanese manufacturers were seeking very quick and sharp handling characteristics for their racer replica models—making them resemble full-on race machines as much as possible—the members of Yamaha’s model development testing group firmly refused to accept a handling character that made the machine difficult to ride. This was because of their commitment to a handling character that was in tune with rider perceptions. That philosophy was applied to the FZ750 as well, and helped make it a masterpiece that would further establish the legend of Yamaha Handling.

During the years spanning 1980 to 1985, when Yamaha was reviving the 2-stroke supersport category with the RZ250 and pointing the way to the racer replica era with the TZR250, another revolutionary industry trend was emerging in the form of 4-stroke 4-cylinder supersport models. This trend escalated to the point that the manufacturers were boosting their big-bike displacement to over 1,000cc, and with performance now entering the very-high-speed range, the big challenge for handling was finding ways to keep pace with these advances. Having expanded and solidified the reputation of Yamaha Handling in the 4-stroke 4-cylinder category with the incredible XJ650, Yamaha now turned its efforts to upping engine displacement as its rivals had. This move came in response to the success of the Honda CB900F that had been popular ever since its launch in 1978. 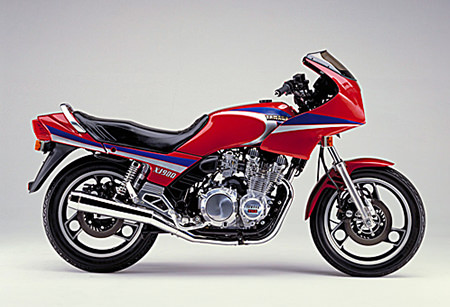 XJ900 (Released in 1983)
After the XJ650, the air-cooled, in-line 4-cylinder engine used in the XJ Series went on to become a base power unit for Yamaha’s road sport bikes, and was mounted on a diverse range of model variations with different displacements and exterior styling.

Yamaha released the XJ900 in 1983 as a model that mounted a scaled-up version of the engine from the successful XJ650, and it became a long-seller as a standard model. Jiro Izaki, a principal member of the model development testing group (Yamaha’s Road Testing Unit, 2nd Project Engineering Division at the time of the interview) during this period of many dramatic changes that began with this era of very-high-speed motorcycles, spoke to us about what model development was like back then. He explained what went on for us in very real terms: “The XJ650 was the first development project I worked on after joining the testing group.

“Since it had won a reputation in the market as a bike with good handing, the XJ900 relied too much on that reputation. When we took it to Europe for tests during the development stage, the testing team over there wasn’t very happy with us, because the bike still didn’t have sufficient straight-line stability. One of the reasons was that our test course in Europe had been damaged by heavy rains, and the straight section was unusable so we actually hadn’t been able to do enough testing in the top-speed range from the early stages of development. In any case, the strictness of the demands for straight-line stability in the very-high-speed range that we encountered that time in Europe was a real eye-opener for us.”

Considering the fact that Yamaha had always based its development approach on good stability, the XJ900—even in its early stages of development—surely had a feeling of stability beyond what was considered the standard then. But in Europe at the time, Germany’s Autobahn (which had no speed limit at all back then) made it possible to ride and cruise at top speed. That meant that for these big bikes that could now easily reach speeds over 200 km/h, straight-line stability in this very-high-speed range was the most important element in evaluations. Yamaha was hurrying to develop its new FJ1100 as its flagship model, and the aim was for it to be crowned “King of the Autobahn.”
“In developing our first over-1-liter supersport model, we made stability in the top-speed range our top development priority. Even if it meant that the machine would a bit difficult to turn, we made the decision to go all out to build a bike that ran so straight and stable in the very-high-speed range that riders could hum as they rode along,” explains Izaki. “For that reason, we abandoned the idea of making it an extension of the XJ900 model that had been based on the XJ650, and worked instead to take our chassis development to a completely new level. That led us to build and start testing the new frame we had in mind even before the engine was finished. Since Yamaha didn’t have an over-1-liter supersport model and engine at that time, we took a 1,100cc engine from another manufacturer, made major modifications to it and mounted it on our prototype frame. You might call it a ‘pre-pre-test machine.’ Then we went out and ran tests with it,” recalls Izaki. 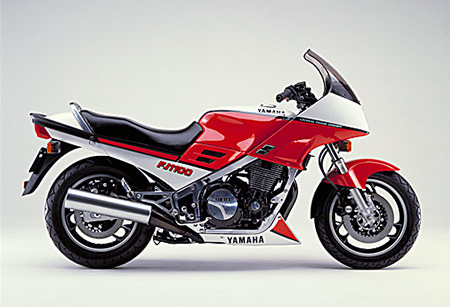 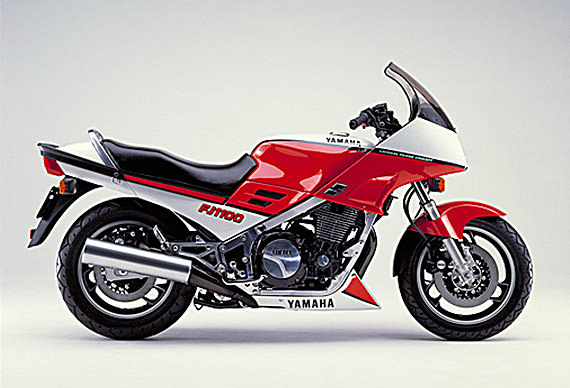 That frame had a unique layout that was developed with priority on achieving the required rigidity in the steering head assembly. Called the “lateral frame,” it was an extremely-high-rigidity spec frame in which the main pipes from the rear extended past the steering head, wrapping around both sides of it all the way to the front, so it embraced the head from all sides. “We got a good feeling from it on the test course. But because of what had happened earlier with the XJ900, it was decided that we take it to Europe for preliminary testing, just to be on the safe side. We shipped this ‘pre-pre-test machine’ to our Yamaha Motor base in the Netherlands,” explains Izaki. “The minute the staff over there unpacked that prototype, they yelled, ‘It’s a Bimota!’ At first, we had no idea what they were talking about. Then they brought us a copy of a European motorcycle magazine and showed us a picture of that Bimota model. Sure enough, it had the same layout. That really embarrassed us. It turns out we had been just a little too late in unveiling our design...” he reminisced.

At the time, Italian manufacturer Bimota was producing specialized motorcycles that had recently drawn attention with models that took Japanese-made 4-cylinder engines known for their performance and quality, and mounted them on Bimota-designed frames with a unique layout. These frames wrapped all the way around the steering head, and the company had been vaunting the good handling performance the frames produced. There must have been many motorcycle fans who thought that Yamaha had copied Bimota’s design when the FJ1100 came out, but the resemblance was in fact a complete coincidence. 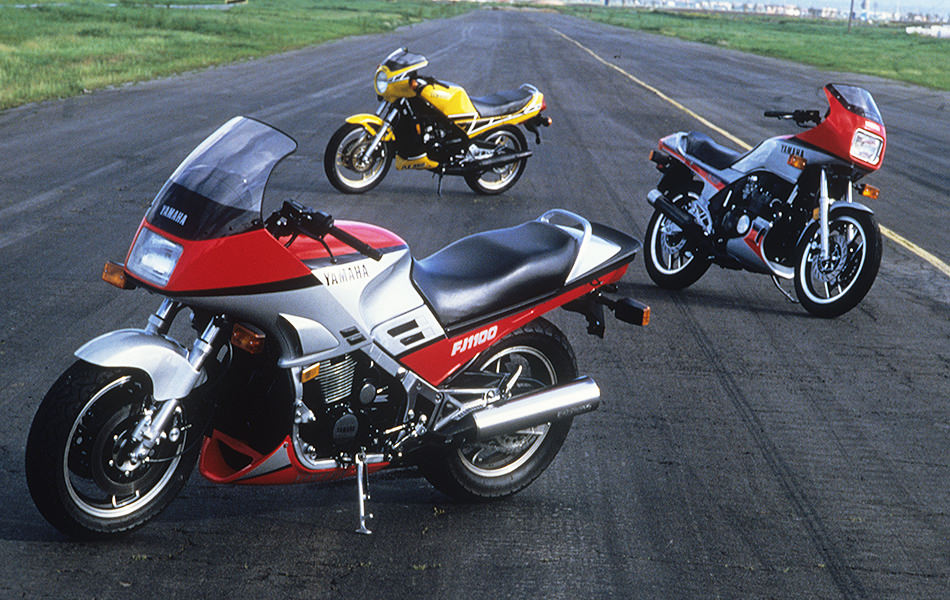 “The FJ also had other new development themes. In the initial stages of development, it had 18-inch wheels front and rear, but in order to stress the model’s positioning as a supersport bike with new technologies, it was decided to go with 16-inch wheels front and rear,” Izaki explains.
This was the result of efforts to aggressively introduce features that represented new technology at the time, and it was based on the advantage of having a lower center of gravity from the standpoint of stability in the very-high-speed range. It was also the first Japanese big-bike to have small-diameter wheels front and rear, and this was compounded by the fact that it was a first for the supersport category as well.
“Of course, we had some worries about using 16-inch wheels front and rear at first,” notes Izaki. “But being 99% sure of our primary goal to build a machine that ran straight and steady in the top-speed range on the German Autobahn, we were able to get the ‘go ahead.’ This experience with the FJ1100 contributed to using a 16-inch front wheel for the FZ400R later as well,” he concludes.
The FJ1100 also adopted a standard chain for its final drive instead of a shaft like the XJ650 and XJ900. The FJ1100’s character had the strong feeling of stability you would expect from a machine with an extremely low-set center-of-gravity. The ride was so unique and fit the preferences of German riders so well that, with the subsequent emergence of racer replicas, the FJ1100 came to be positioned as more of a full-on touring machine than a supersport. With its evolution to the FJ1200, it became a long-seller with lasting popularity like the XJ900.
(Continue to Part 2) 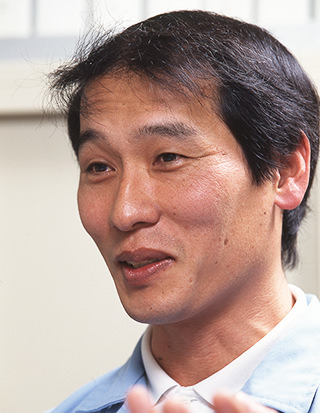 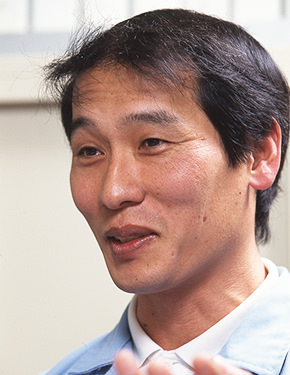 Jiro Izaki, a member of Yamaha’s Road Testing Unit, 2nd Project Engineering Division at the time of the interview