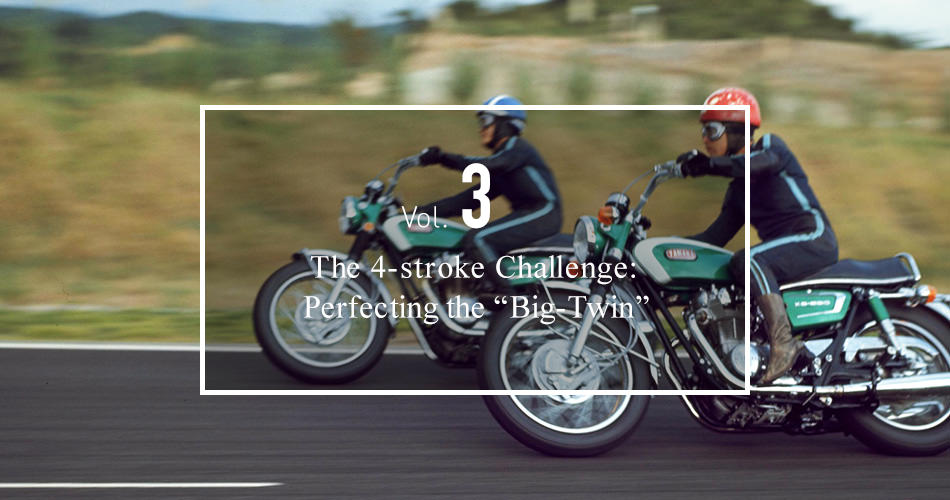 Yamaha Motor quickly won a world title after launching its World GP quest in the early 1960s, and had made its name known worldwide as a sport bike brand by the latter half of the decade. As the other Japanese motorcycle manufacturers joined in the challenge of the “big-bike” category, it sparked a new era of intensive motorcycle development. Despite its specialization in 2-stroke models, Yamaha naturally turned its R&D assets to the new goal of creating bikes with large-displacement 4-stroke engines. As the other manufacturers sought to outdo each other in the development of 4-cylinder models, Yamaha chose to concentrate all its efforts on developing “big-twin” models.
Considering Yamaha’s established success in building lightweight high-power bikes, it was perhaps only natural that it would steer a course different from the rest. Yet few would have imagined at that time that Yamaha’s choice to compete against the 4-cylinder models with the twin-cylinder engine would lead to making handling more difficult to develop and eventually cause the company to face dilemmas. Still, there would be an unexpected benefit from the difficulties Yamaha would encounter by refusing to follow the same path as its competitors and instead pursue the big-twin on its own: Yamaha would be forced to tackle the intricacies of handling early on, and the handling know-how it accumulated in race competition would later be passed on to its big-displacement 4-stroke street bikes.

Big-Bike Development Begins with Sights Set on the American Market

In 1967, when the Japanese manufacturers were still focused on the World GP, Honda unveiled its vertical-twin CB450 model, the first big-displacement production bike with a DOHC cylinder head. After cementing its image as the world’s supersport bike manufacturer with the CB72 (250cc) and CB77 (305cc) models, Honda moved on to its next challenge. Kawasaki also entered the big-bike market with its W1 model—which used the OHV vertical-twin engine the company acquired after absorbing the Meguro Manufacturing Company and boosted its displacement to 650cc—and the Mach III with its 2-stroke 3-cylinder 500cc engine.
In actuality, a number of Japanese manufacturers had already been producing 500cc bikes or bigger back in the nascent period of the motorcycle industry before the 1960s. However, these were no more than copies of British or German bikes and were products targeting Japanese users who could not afford the expensive and few imported models available on the domestic market. In terms of performance as well, they were not of a quality that could be exported.
Needless to say, however, when the industry began developing and producing big bikes again in the latter half of the 1960s, it was most certainly with the aim of targeting overseas markets—with the United States as the prime target. For motorcycle manufacturers at the time, the country was the biggest motorcycle market in the world during the 1960s and 1970s. There, it was popular among the younger generation to ride big, 650cc class British-made bikes like a Triumph or BSA. Hoping to ride this wave as well, BMW launched a 750cc model on the U.S. market with “Americanized” coloring. 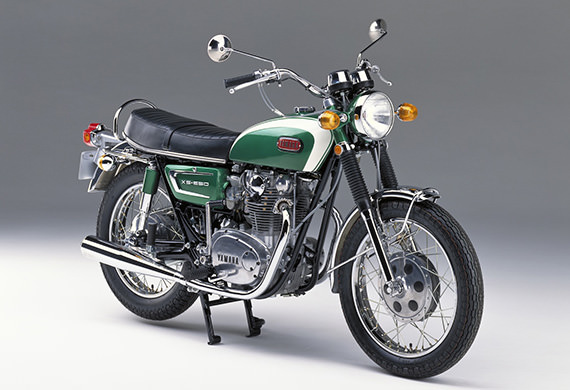 1970 XS-1
The XS-1 was Yamaha’s first 4-stroke big-twin machine.
It debuted in 1970 with styling based on the design trends of British motorcycles of the day.
Its engine was an air-cooled, 653cc, SOHC, vertical-twin with a bore x stroke of 75 mm × 74 mm. The compression ratio was 9.0 and it pumped out 53 PS at 7,000 rpm. With a 5-speed transmission and a body weight of 185 kg, it could reach a top speed of 185 km/h. The XS-1 was succeeded by the short-lived TX750 and TX500 models, and then underwent improvements and was released as the TX650. Finally, it became the predecessor to the “Special” series of Yamaha’s American-style cruiser bikes and went on to attain the status of a record-breaking long seller.

Now having the ability to build models with the performance of these big bikes but at a price equivalent to 250cc or 350cc bikes, the Japanese manufacturers decided that their foremost priority now should be to develop full-fledged big-bike models for the increasingly competitive U.S. market. Symbolic of this new priority was the release of the 4-cylinder Honda CB750 FOUR in 1969. Seeing a mass-production supersport model mounting a 4-cylinder engine—an engine format that had until then been considered limited to GP race machines—sent shockwaves through not only the American market but around the world.
The next big debut was the Kawasaki Z1, which had been originally under development as a 750cc model but quickly up-sized to a 900cc displacement when the Honda CB750 was released (although it was released in Japan with the original 750cc displacement as the Z2). With these models released, the Japanese manufacturers had made a big and quick entrance into the era of big bikes. Not to be left behind, Yamaha turned to developing its own big bikes. However, this first attempt at a 4-stroke engine for a production model turned out to be a long, hard road with many obstacles that lasted until the start of the 1980s. Yamaha’s big bike development was an uphill struggle that lasted years.

It can be said that this rocky road began with the difficulty of finding a viable product concept to develop. The reason was that, unlike the other Japanese manufacturers that were pursuing the 4-cylinder format, Yamaha had clung to the idea of a vertical-twin like the British bikes that were popular in the U.S. From the hindsight of today’s know-how, it’s easy to see that a big bike powered by a twin-cylinder engine would be a category susceptible to problems in handling. If the aim were simply to build a bike with good handling and not too much expectation for engine performance like the British bikes, things would be easier. But, if you had an eye on the 4-cylinder machines of the competition and were trying to get as much power and top speed as possible out of the engine, the vertical-twin would almost certainly make the bike’s center of gravity higher, even with a slim chassis, and getting good handling stability out of the machine would be an incredibly difficult task.

Yamaha’s first 4-stroke big bike was the XS-1 that debuted in 1970 mounting a 650cc, SOHC vertical-twin engine. It was a bike with beautiful styling inspired by the British Triumph and BSA models, but it was developing the machine’s handling that caused the engineers the most headaches. “In developing the XS, the first engine we had wasn’t reaching the performance standards that we’d set, so that was the first problem our engineers tackled,” says [the late] Takafumi Fujimori as he looked back on those times and explains the circumstances the team faced.

“At the time, I often went to see what was happening at the engine bench. Unlike the intake and exhaust ports of a 2-stroke, they said 4-strokes were all about the cam profile and they were changing it by welding on additional ridge height and then using a grinder to grind it down again. It was really like we were feeling our way through the dark,” continued Fujimori.
Trying one thing after another, the team gradually approached the target engine performance goals and started test-running the bike. Just around that time, the Yamaha Fukuroi Test Course was completed. Thanks to this course where development teams could test the bike on the high-speed straight and ride through the turns, the reputation of Yamaha’s motorcycles for good handling would be further strengthened over time. Needless to say, however, the XS-1’s stage of development hadn’t reached that level of testing yet. “At first, handling stability was tested in the 140–150 km/h speed range. It was later raised to about 180 km/h, but we started the development in the former range. There were no particular problems at that speed. But, as the prototype’s performance and speed increased, we began to get shaking at the handlebars. 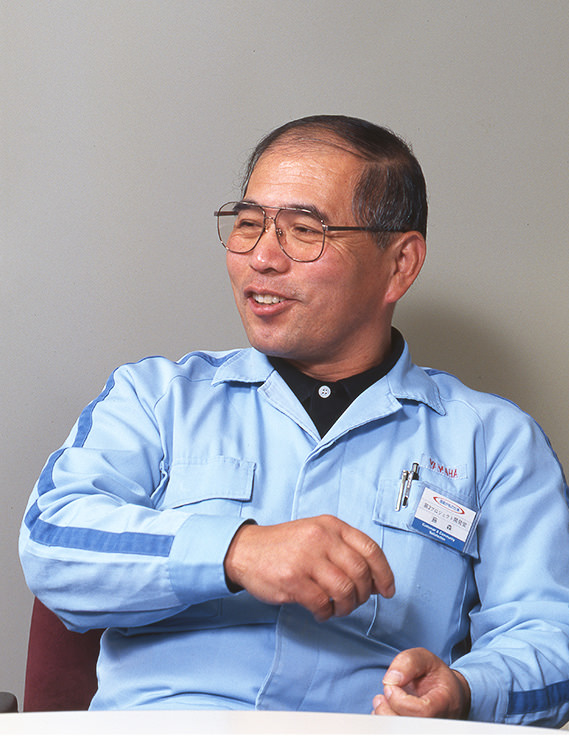 Takafumi Fujimori remembering the development of the XS-1 (1996)

When you have this kind of shaking known as speed wobble, in many cases it increases rapidly in oscillation, and if you react by cutting back on the throttle suddenly, the built up stress on the bike will immediately rebound, causing the handlebars to wobble even more violently to the point where it can cause a fall.
“After testing it, I went back to the engineers and reported to them that it really shakes badly. This was a new experience for them too, so they turned around and asked me, ‘What should we do?’ Since it was shaking, the obvious conclusion was that the chassis wasn’t rigid or strong enough. So, they tried rebuilding everything from the engine mounts to the swingarm pivot. On the frame they welded in a cross-pipe and gusset plates at the pipe joints to increase the rigidity. When they did that and I tested it again, I could feel how it’d been stiffened, and began to get a feeling for what the difference was. This was probably the first time that we treated handling stability as a basic fundamental element of ‘technology’ in developing a production model. It was because we were now working on a big bike that forced us to deal with this problem, and afterwards, I often found myself thinking that it really was fortunate that this problem came out at such an early stage in our big bike development.”
Back then, the general machine design would come first, then the layout and format of the engine would be decided, and after that testing would begin. Since at the time there was no know-how like today that could enable the engineers to first decide on chassis specs that would prevent these kinds of technical problems from occurring later in the development, it was no wonder that things turned out that way. Also, I’m told that the way targets for performance and handling were set was to look at what the competitors had already done with their models and judge what was good enough based on what they had achieved. In that sense, since there was also speed wobble occurring in the Triumph and BSA bikes at higher speeds, they hadn’t taken the problem so seriously in the early stages of the XS-1’s development.
(Continue to Part 2) 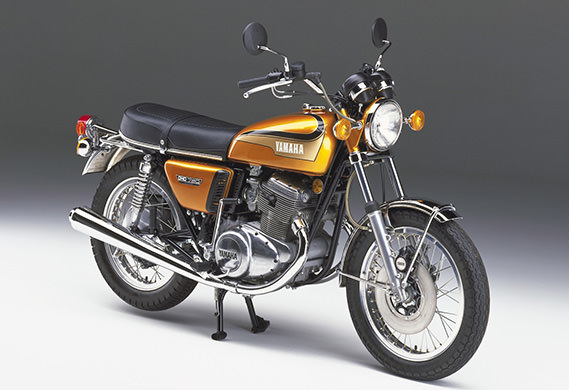 1972 TX750
The TX750 was Yamaha’s first 750cc road sports model. It had the unique feeling of torque and pulse typical of an in-line 2-cylinder engine and nimble handling thanks to the slim chassis design. (Released in 1972) 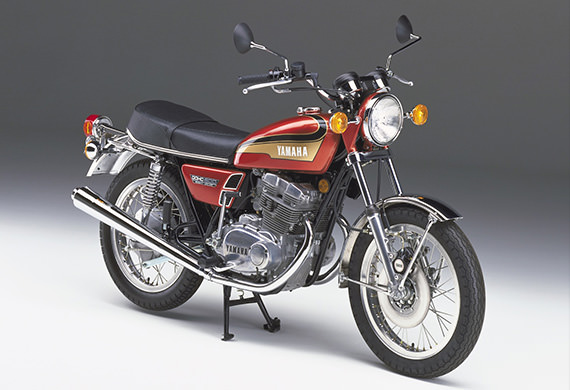 1973 TX500
The TX500 was Yamaha’s first road sports model with a DOHC engine. It came with aluminum wheel rims and a front disc brake, and had sporty performance. (Released in 1973)