In the 1970s, while its rivals had all decided to take on the challenge of developing big, 4-stroke 4-cylinder bikes, Yamaha had taken a different route and chosen to focus on developing big-twins. Yamaha started by introducing the 650cc XS-1, and followed up with new models like the TX750 and TX500, but none of them ever became a hit with the motorcycling public.
However, this era represents an important period for Yamaha, as its continuous efforts to fine-tune the handling of a big-twin despite the innate difficulties of the format resulted in the company gaining much knowhow regarding rigidity and other areas of chassis development before the other Japanese manufacturers. In 1976, after releasing the 3-cylinder GX750, Yamaha finally began developing a 4-cylinder model like its competitors. All of the chassis expertise Yamaha had gained earlier was put to use and given form with the development of the XJ650 model, and its class-leading, well-balanced handling is what brought back the company’s “Yamaha Handling” reputation.
This model’s highly refined and rider-sensitive feel became the foundation for creating the handling of Yamaha’s sport bikes, and that tradition continues on with today’s models. In this segment, I’d like to delve into the factors that made the XJ650 such an incredible and timeless machine, while including some of the impressions I wrote in RIDERS CLUB magazine during its 3rd year of publication.

Yamaha’s new big-twin TX750 and TX500 models that it had developed to take the fight to its competitors’ 4-cylinder machines were not well received by the market, but numerous improvements for the vertical-twin XS-1 (the name was later changed to TX650) continued to be made. It’s not an exaggeration to say that without the XS-1 and the wealth of chassis-related knowhow gained from it, Yamaha would not have been able to create the successful big bikes that would follow.
At the time, I’d left the Kawasaki-based race team I’d been with until then and started my own privateer team. This marked the beginning of my own challenge to get by at a time when only factory riders could actually make a living as a professional motorcycle racer. Also, sufficient amounts of prize money were not given out, so besides securing sponsorship, you had to get involved with a company in a motorcycle-related industry on the side as a test rider. Luckily for me, I was able to work for a tire manufacturer as a test rider as well as doing some engineering-related tasks.

Back then, all the Japanese motorcycle manufacturers were facing difficulties in developing the handling of their first big-bike models. It’s not that surprising though, because most models would have their design sketches done first, and work done on the chassis design and engineering afterwards. For example, even if the engineers knew that placing the engine in a lower position would probably bring greater ride stability, they essentially had no knowhow about how the engine’s positioning is related to the design of the motorcycle’s wheelbase, its wheel alignment, etc. This wasn’t much of an issue in the 250cc class, but for 4-stroke big-bikes that weigh over 200 kg and have engines with much more power, just getting the machines to ride in a straight line is a difficult task. This is even more apparent when trying to reach speeds like 200 km/h on a production model, which was considered unknown territory by the overseas motorcycle manufacturers that had begun developing big-bike models earlier than the Japanese. 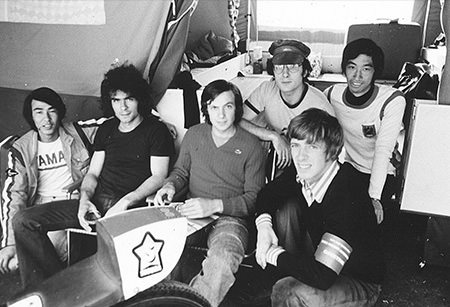 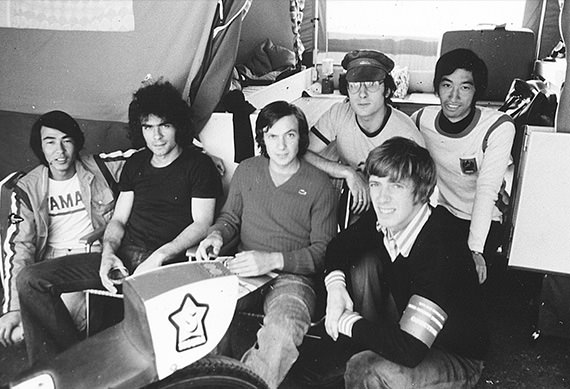 At the Magny-Cours circuit in France (1973)
Nemoto (far right) was given a round-the-world ticket as a prize after being selected as the season’s top rider by the Motorcycle Federation of Japan (MFJ) in 1973. In this picture from his travels are Ryoichi Mori (far left), Patrick Pons (center) and Olivier Chevallier (bottom right)

But, from my perspective, it was an incredible opportunity to learn about motorcycle-specific tires from the ground up, and I was fortunate enough to spend my days involved in developing OEM tires for production models as well as Japan’s first racing slicks.
It was something only possible in the earlier stages of the Japanese motorcycle industry.
The most vivid memory I have from developing OEM tires for a mass-production motorcycle is none other than the work that went into developing the tires for Yamaha’s TX650. Tire manufacturers would work together with any bike manufacturer to develop an OEM tire, but among them, Yamaha’s goals for handling were the most stringent.

The degree to which Yamaha went in implementing the chassis development knowhow it had acquired from big-bike development while testing the TX650 was nothing short of astounding.
The intensity of Yamaha’s engineers left a big impression on me and the team of tire engineers. The tire manufacturer decide to take on all orders and requests from Yamaha, because they knew that if they stuck with Yamaha through this quest, they too would gain expertise in big-bike tire development faster than their own competitors.

One of the ways this was done was to recreate the same conditions of the unique methods that Yamaha was employing for its own speed wobble testing. One was to create a hump of asphalt on top of a large iron plate, then position it on the long straight or high-speed corners of the test course where the motorcycle would go over it at high speeds of 140–160 km/h.
Yamaha was conducting this test at their Fukuroi Test Course,
but we also created the same artificial hump and did the test at Fuji Speedway. You would accelerate on the TX650 to speeds of 140–160 km/h, and then run over this installed road hump.
The shock felt like the bike had just slammed into something. The front wheel hitting it first would cause the handlebars to jerk heavily to the left or right, and then when the rear wheel hit the hump right after, it would jolt the bike upward and cause the entire chassis to wobble drastically.

My heart was in my mouth until I got used to it. Moreover, this wasn’t done just on the straights but also in high-speed corners with the bike banked over! Since the front wheel has a caster angle, the shock from hitting the hump with the chassis leaned over would of course cause the handlebars to jerk fully locked to the left or right, and the end result was that the front wheel would emit a high-pitched whine. I came close to crashing many, many times...

But, the degree of wobble began to lessen as we created a structure for the rear tire carcass that had good, effective damping characteristics. As we also managed to find a way to create a structure with uniform rigidity for the front tire, the TX650 gradually transformed into the bike people know it as today,
one that speed wobble doesn’t occur on. For the final version of the TX650, the carcass of its tires used rayon cord, the same structure as the Metzeler-brand tires that had won a reputation as having the greatest feeling of stability when riding on the Autobahn in Germany. The reason rayon cord was needed was because it’s a short-strand material. Put simply, while nylon is commonly used in many tires, it’s a long-strand material, which means that in a tire it becomes taut from the internal pressure and, when subjected to outside shock, the whole tire resonates. On the other hand, tires made with short-strand rayon quickly absorb vibration within the area that is subjected to shock. This prevents the transmission of vibration to the rest of the tire.

The principle is the same as a 6-string classic style acoustic guitar in which three of the strings are made from one piece of long-strand nylon for high-pitched sounds, and the other three strings for low-pitch sounds are steel-wrapped wires with short-strand material for the core. While the strings for high-pitch sounds vibrate longer, the low-pitch strings quickly dampen vibration. This should sound somewhat familiar even if you’re not a guitar player.
But, the industrial fibers used in Japanese tire carcasses at the time were mainly nylon and polyester, and rayon wasn’t used in any of them. So, the fact that the developers went to the lengths of importing costly rayon cord from Europe for the tires on the TX650 is an interesting aspect of their history. 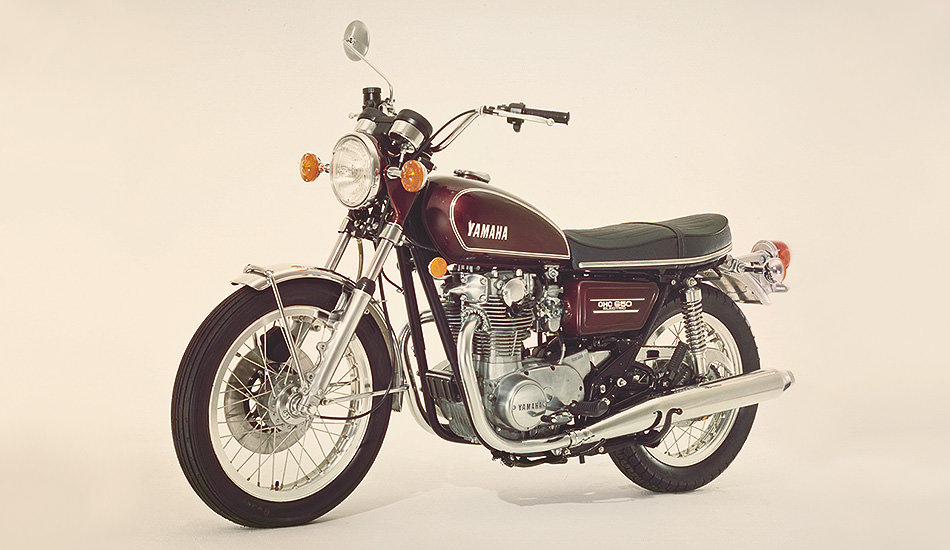 TX650
This model inherited the vertical-twin engine and beautiful styling of the XS-1 while adopting a newly designed frame, high-rigidity swingarm, H-type aluminum wheel rims, revised damping characteristics for the front and rear suspensions and more, which combined to greatly improve its performance and ride characteristics. (Released in 1973)

The Aim Was Handling That Put the Rider Completely at Ease

The problems didn’t end with just speed wobbles, however. The rain grooves in the roads on the West Coast of the United States meant further measures had to be taken. Rain grooves are thin grooves cut longitudinally into the road pavement as a means to improve water runoff and help prevent hydroplaning by vehicles from lack of grip when sudden heavy rainfall would otherwise leave a dangerous layer of water on the road. They don’t cause any adverse effects for cars, but in the case of motorcycles, these longitudinal grooves cause the front and rear wheels to feel like they’re “wandering” and can cause the rider to panic. In Japan at the time, a trial introduction of rain grooves was done on the Tohoku Expressway near the town of Nasu in Tochigi Prefecture.
I had to go up to Nasu multiple times to road test prototype tires with various tire profiles, patterns and pitch to try and gauge the effects of the rain grooves.

Of course, Yamaha’s requirements for the tire manufacturers were not limited to finding solutions for these kinds of special road conditions but extended to every aspect of handling. While Yamaha continuously sought ways to improve pivot assembly rigidity and wheel alignment, they also continued requesting tire manufacturers to create tires that had no handling flaws. As rear tire profiles began getting flatter, the front tire took on a more rounded profile and the balance they brought to the motorcycle’s wheel alignment made them easier to ride. It was around this period that such knowhow began to be gained.

However, Yamaha’s requirements became even more demanding. The company stated that Japanese OEM tires had the handling and grip they wanted for the first 1,000 km of use, but greater tire mileage brought uneven wear that caused performance to drop suddenly. This was a fact. I had begun racing in the World GP as a privateer at the time, so I was away in Europe. Between races or during the off-season, I’d do 3,000 km test rides for prototype tires on the Autobahn and other roads on the TX650 without tire changes to verify the differences in tire specs.
Yamaha would not compromise when it came to pursuing natural handling that made the rider feel at ease on the bike. This approach certainly won me over because, in all honesty, the other motorcycle manufacturers at the time simply weren’t going this far. For most of them, if there was enough grip when pushing the bike to its limit and no wobbling at the handlebars, that was enough.
(Continue to Part 2) 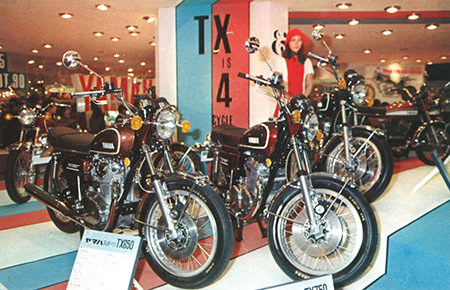 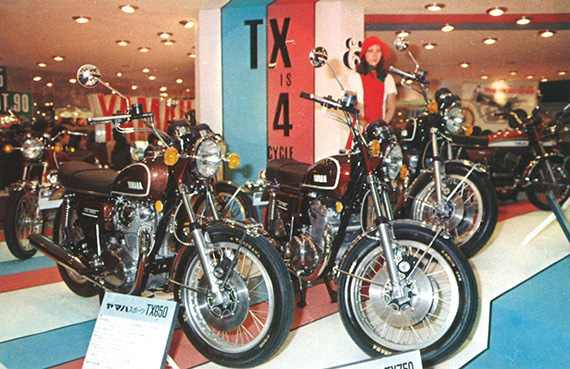