From “Supersport” to “Pure Sport”: The New YZF-R1 Is in Another Dimension

Yamaha’s long-held and uncompromising pursuit of handling that always feels natural and in tune with the rider’s perceptions has been based on a commitment to the firm belief that, no matter the type of sport bike, priority should always be placed on ease of use for the type of riding that the customers will actually be doing, namely touring. This philosophy has always set Yamaha apart from its rival manufacturers. However, as the evolution of flagship high-performance models continued relentlessly thanks to feedback from the development of machines for superbike races and MotoGP, the need arose for Yamaha to define a new concept of top-level performance that was different from other types of sport bikes. The YZF-R1 that debuted in 1998 in the midst of this period of transition was Yamaha’s answer to this need, but it also represented the laying of groundwork for the further and unique evolution of Yamaha Handling. Now, the YZF-R1M—a very special machine designed to offer top performance on the racetrack for a select few riders—makes its debut as the latest product of a development approach that is full of uniquely Yamaha innovations.

Born in Tokyo, Japan in 1948.
Withdrew from Keio University’s Faculty of Letters.
He began riding motorcycles at age 16, won the 750cc All Japan Road Race Championship title in 1973 and competed in the World GP from 1975 to 1978. After returning to Japan, he served as the editor in chief of RIDERS CLUB magazine for 17 years and also served in producing a wide variety of hobbyist magazines. Today, he competes in the AHRMA’s classic motorcycle races at Daytona Speedway as part of his life work.

The Overwhelming Impact of a Newly Designed Crossplane Engine

The YZF-R1M is a special version of the new 2015 YZF-R1, and was released simultaneously. As a model that opens up a new page in the tradition of Yamaha Handling, I had the opportunity to test-ride the new R1M at Yamaha’s Fukuroi Test Course and see what the latest evolution in handling actually feels like. Now putting out incredible amounts of power, the R1M also mounts a number of new devices fed back from Yamaha’s MotoGP machines. Although it’s supposedly designed to help riders recover from mistakes, I must admit that despite my more than 50 years of riding experience, I was more than a bit intimidated by its reported capabilities just before my test-ride.
However, from the moment I accelerated out onto the test course, my nervousness changed first to surprise and then gradually into a feeling of delighted excitement.
Using the quickshifter, I rapidly shifted up without touching the clutch lever. The bike responded by shifting and accelerating seamlessly up through 3rd, 4th and 5th gear, but more importantly, the feeling of acceleration didn’t change, even when I reached the high-speed range. That experience was exceptional; it was something I had only felt until then with a MotoGP machine, and it immediately made me feel what this meant in terms of performance. 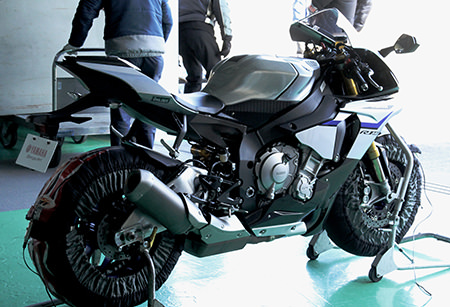 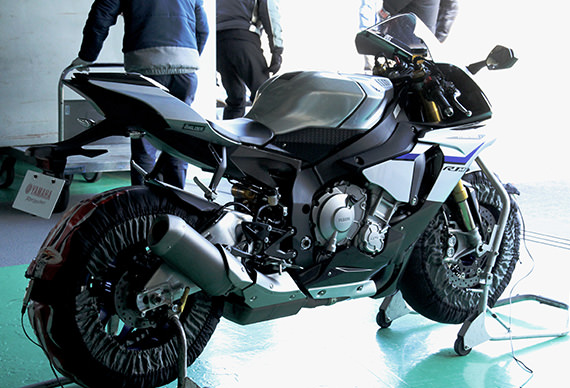 Another thing that added to and deepened my excitement was the unique exhaust note. This wasn’t my first time riding an R1 with a crossplane crankshaft, and I knew that the different firing interval of the engine gave it a different sound from other in-line 4-cylinder machines. But, what I was now hearing from the machine I was riding sounded unmistakably the same as the YZR-M1 MotoGP machine. Being a street-legal bike, it has to comply with regulations for absolute noise volume; the sound was being muffled. But the unique and composite mix of different sound frequencies and the clear and crisp pulse you feel through the mid-range remains distinct without blurring into a continuous drone, even up into the high-speed range around 13,000 rpm. It conveys a sense of the linear rise of power being transmitted to the pavement.
Stimulation to the senses with this amount of intensity didn’t exist in previous models. The degree of clarity in how this sound symbolizes Yamaha’s choice to take the R1 to its next stage of evolution feels rather enjoyable. A bit embarrassed by the unexpected delight I was feeling inside my helmet for someone my age, I made an effort to relax and refocus my attention on the ride. 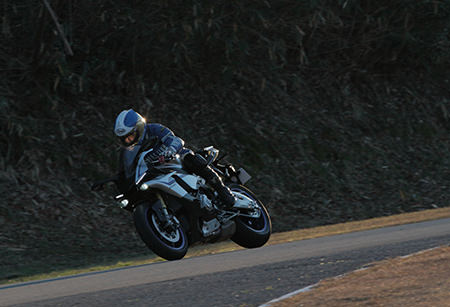 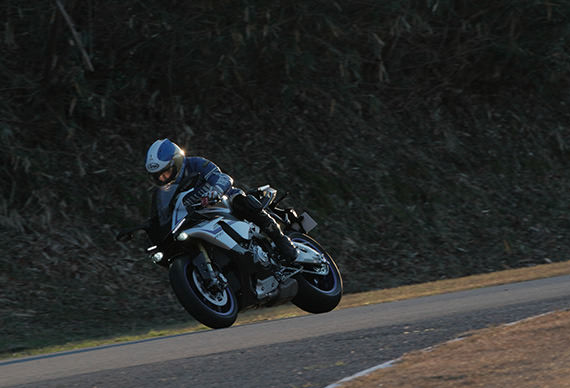 Of course, the purpose of the crossplane crankshaft is not to produce this unique sound. The in-line 4-cylinder engine configuration is one that has little vibration and good balance under steady-state conditions such as continuous acceleration. However, with a conventional crankshaft that moves the two pairs of pistons at directly opposed 180° angles, the weight of the crankshaft—which is intended to ensure smooth reciprocating motion of the pistons while translating their reciprocating motion into rotary motion—tends to easily cause shaking of the chassis (specifically in the engine) in both the vertical and longitudinal directions when the throttle is being opened or closed. Although this tendency occurs only at the precise moments of opening or closing the throttle, the behavior it causes during cornering can feel very unsettling for a sensitive rider.
With Yamaha’s crossplane crankshaft, however, the angle between the two pairs of pistons is shifted to 90° in order to disperse the inertial force [component of composite torque] and lessens its effect on the chassis, thus minimizing its interference with the rider’s concentration. Of necessity, this change in the firing interval results in the unique tone of the exhaust sound. But the uneven pulse it produces is also the reason why it’s easier to get good traction and why the machine is easier to control—even if the rear wheel should slip for an instant—because the delay in response caused by inertial force is minimal. 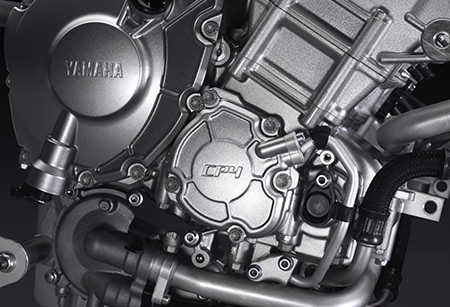 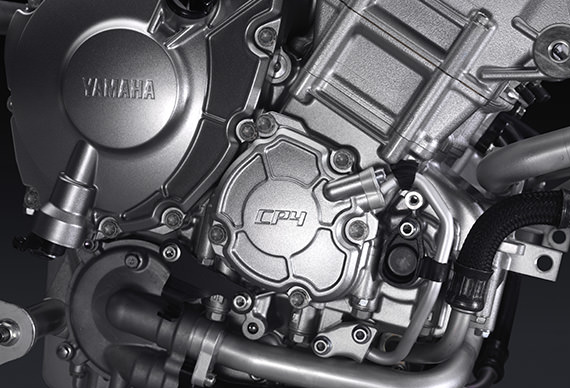 The 2015 YZF-R1’s all-new “CP4” crossplane engine
The methods used to give the new R1 the power to make it a race-winning machine involved a thorough pursuit of the surprisingly simple development goals of improving volumetric efficiency, improving combustion efficiency and eliminating horsepower loss. Together with the innovative electronics package using a 6-axis IMU, the R1’s development approach is the same as the YZR-M1 MotoGP machine.

It goes without saying that this is all feedback from development of the YZR-M1 MotoGP machine, but some might question if the differences are so clear that even the everyday rider can feel them. With the R1M, I found myself being constantly amazed by the difference. The more advanced extreme-performance machines like this become, the more tangible the difference is in whether or not the machine is able to reduce those momentary feelings of tension a rider experiences while riding it. On the R1M, this is especially obvious with the subtle rider support provided by the suspensions. The fact that this bike is so easy to ride even at the average speeds for touring—far short of the machine’s performance limits—is certainly proof that anyone will recognize, regarding the advancements that have been made in the R1’s handling and performance.

You will have to excuse me if in my enthusiasm I seem to get too technical in my explanations, but it’s largely due to the fact that even I never would have expected the advances this machine represents for Yamaha Handling. In the especially important cornering performance aspects that I will discuss in the following sections, I hope you will appreciate that it is impossible to fully explain the differences of the new R1’s uniquely Yamaha handling without delving into the technological innovation and effects they are based on.

First of all, let’s recreate what it was like going through an S-curve, which is easy to understand. It begins with the braking and downshifting to drop speed to enter the initial right turn, and the first thing that surprised me was the feeling of the brakes. When I squeezed the brake lever, the touch felt gentle, not letting you feel the point where the hydraulic pressure starts to kick in. To borrow an expression, it was “killing me softly” as the deceleration g-forces grew with the smoothness of a quadratic curve. Also, there was no sudden nosedive and the changes in machine attitude came gradually at a pace that never shakes the rider’s sense of assurance. There’s also ABS to compensate when necessary, so there is no need to let doubt start you second-guessing.
There is also no abruptness accompanying the engine braking when you downshift, and the deceleration g-forces feel steady with no sharp drop as rpm falls. With the feeling of the rear wheel gripping the pavement as your guide, you shift your weight to the inside of the turn, and there’s no delay at all in the front wheel’s change of direction as the bike leans to begin the turn. The front and rear wheels begin to make the turn together, and although there is actually a split-second of time lag before the front wheel begins to follow, it’s not enough to spook the rider. The feeling of balance as if both wheels are following each other simultaneously is truly impressive. In a scene like this, skilled riders will use techniques to maintain machine balance like the quick shifting of body weight, but with the new R1, these kinds of techniques aren’t necessary at all. 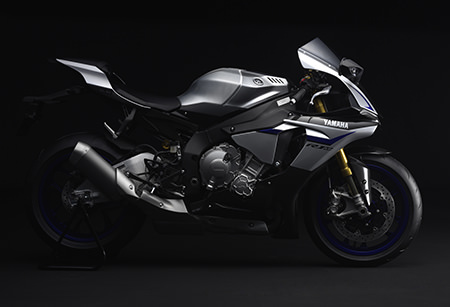 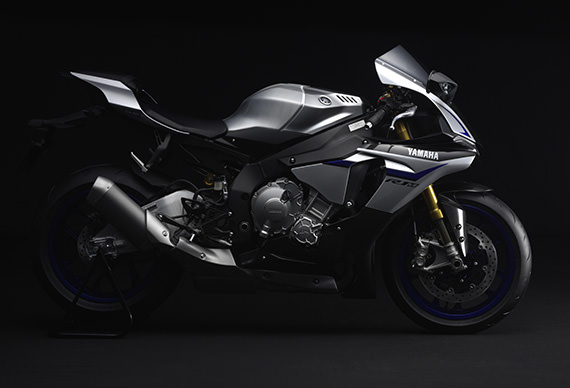 YZF-R1M (Released in 2015 for overseas markets)
Developed under the concept of a “High Tech Armed Pure Sport” bike, the focus for the R1 was changed from being the fastest bike on twisty roads to the fastest on the racetrack. The new model clearly reflects its connection to the YZR-M1 and everything but the R1 name and its R-DNA is new. Many riders can now enjoy the feeling of what it is like to ride the M1.

In the first few laps of my test run, I would start a turn and in an instant I would be over-turning so much that I was almost running up on the kerb. I realized that I could increase corner entry speed and once the lean angle got deep enough, I could execute the turn with the intention of taking it sharply and at speed. Licking my lips, I started to get excited about really enjoying the bike’s performance. 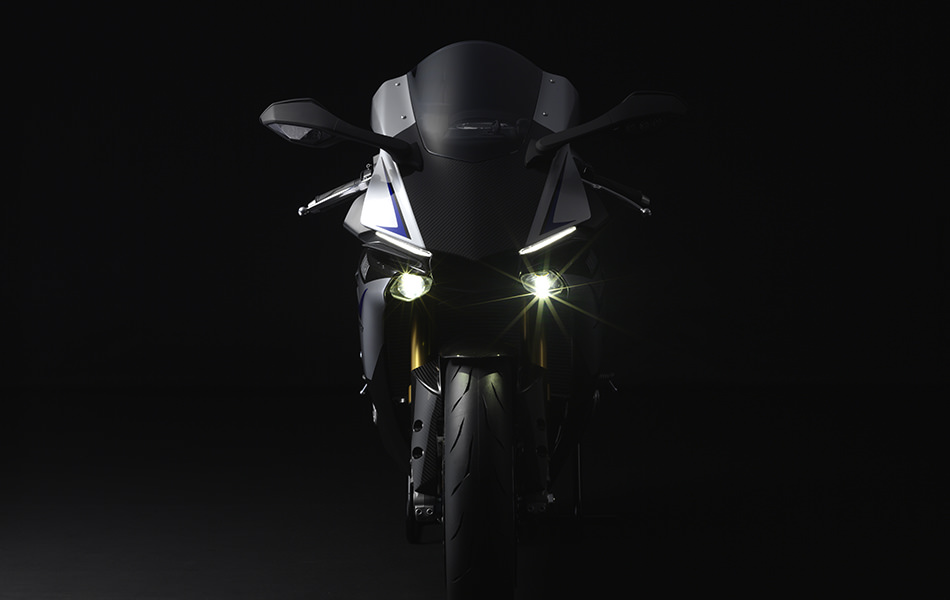 Next comes the changeover from the right turn to the left turn of the S-curve; it’s really light! As soon as I was about to shift my weight to the left side of the machine, it stood upright, and before I knew it, I was already beginning to bank left. It’s that quick. I quickly open up the throttle and position myself to head into the next turn. The engine gave a quick growl and the machine sank with the force of the traction at the rear, quickly settling down into what felt like a steady, reassuring attitude. I have to admit that I’m not at all afraid now, although I’m handling an extreme-performance machine.

What has been happening in this process is that, as the brakes are applied and the deceleration g-forces cause the front to dip, the front fork reacts with the right amount of damping force to moderate the nosedive. At the same time, the braking force at the rear wheel is automatically adjusted and the rear suspension holds an appropriate attitude to ensure solid road grip. Then as you bank, both suspensions gently react to cornering forces (centrifugal force) and when it senses the motion of a changeover into the opposite direction, it lightens the damping force to make the action light and agile; then in the next lean, the machine maintains a balance that provides good grip for the front and rear wheels that makes it easy to turn.
(Continue to Part 2)