In March 2015, Yamaha gave a presentation in Tokyo announcing its plans for the year's motorsport activities, outlining a continuous commitment to make domestic Japanese racing a home base for technical development and personnel training initiatives. Yamaha also announced its intention to contest the Suzuka 8 Hours Endurance Road Race and All Japan championships with a full factory effort.

If this came to pass, it would be the first Yamaha factory entry since Wataru Yoshikawa and Takeshi Tsujimura rode the YZF-R7 to 4th place at the 8 Hours in 2002. The official Yamaha Factory Racing Team was introduced at the end of May amid fans' growing expectations of Yamaha's determination for a win. The team would enter with a version of the newly released YZF-R1 specially developed for the grueling endurance race with All Japan star Katsuyuki Nakasuga and MotoGP regulars Pol Espargaró and Bradley Smith in the seat. 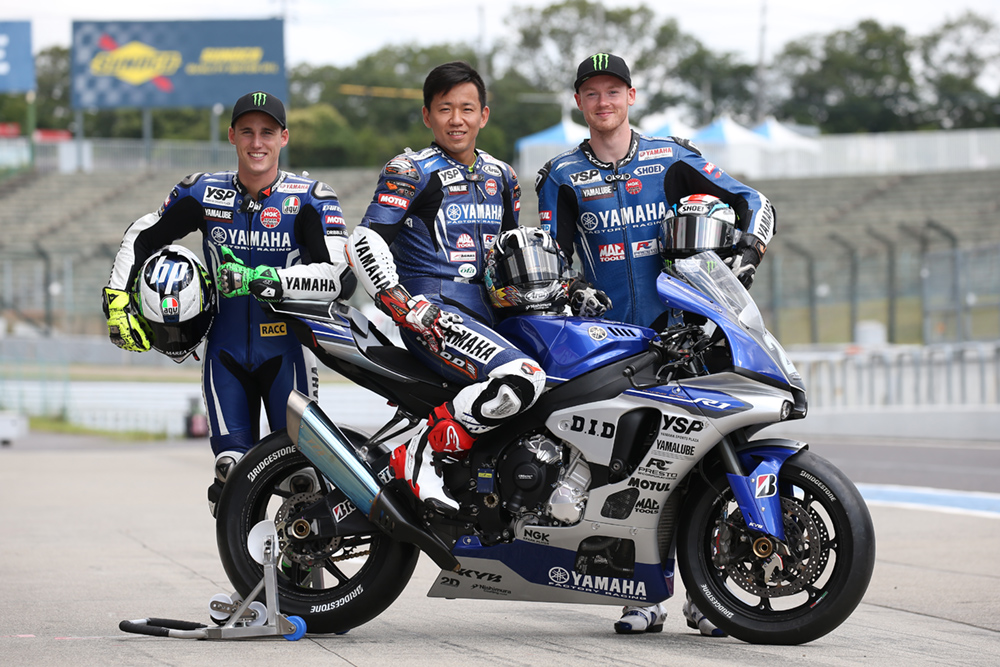 The first chance for the MotoGP riders to sample the YZF-R1 was in a private test scheduled for the end of June. Although it was his first time to lap Suzuka Circuit, Espargaró said, “The power and weight were of course different from the YZR-M1: but the feeling I got from the machine, like the freedom to choose my line and quick direction changes, was basically the same.” Smith also had high praise for the YZF-R1, “I was really shocked that this machine is based on a production model. I'd heard the design team took a lot of cues from the YZR-M1 and I definitely felt the similarities. Also, Nakasuga-san did an outstanding job of getting the bike to this level already.”

After the two-day test, team manager Wataru Yoshikawa also felt the team was in good shape. “I was relieved to hear Pol and Bradley's positive comments. More than anything though, Nakasuga is the man who set up the machine so he must be feeling extremely pleased right now. I think that will probably boost his confidence.” At the second public test, the YAMALUBE RACING TEAM's Kouta Nozane and Takuya Fujita took over testing duties for the race machines before handing them back to Nakasuga, Espargaró and Smith for the final public test in mid-July leading up to the race. The three continued to work on perfecting the setup, as well as practicing pit stops and starts as they made their final preparations for the race.

Finally, the long-awaited race week got underway on Thursday, July 23rd. All three riders in the Yamaha Factory Racing Team quickly got up to speed by setting times in the 2'07 range during free practice, with Espargaró recording a 2'07.282 to top the session timesheets on the first day.

The Yamaha Factory Racing Team repeated that feat again on the second day of free practice with a 2'07.888 to take the top spot overall. In the qualifying session that followed, Nakasuga bettered that time by riding a 2'06.877 lap to put the team in 3rd overall and guarantee a spot in the Top 10 Trial shootout to decide starting grid positions for the ten fastest teams.

Then on Saturday, the two chosen riders from the Yamaha Factory Racing Team took to the track and wowed spectators with an amazing performance. First, Espargaró beat the previous year's pole position time of 2'06.703 by a considerable margin with an incredible 2'06.000 laptime. But 2012 and 2013 pole-sitter Nakasuga also rode his best qualifying lap ever, missing out on beating his teammate Espargaró by just 0.059 seconds. 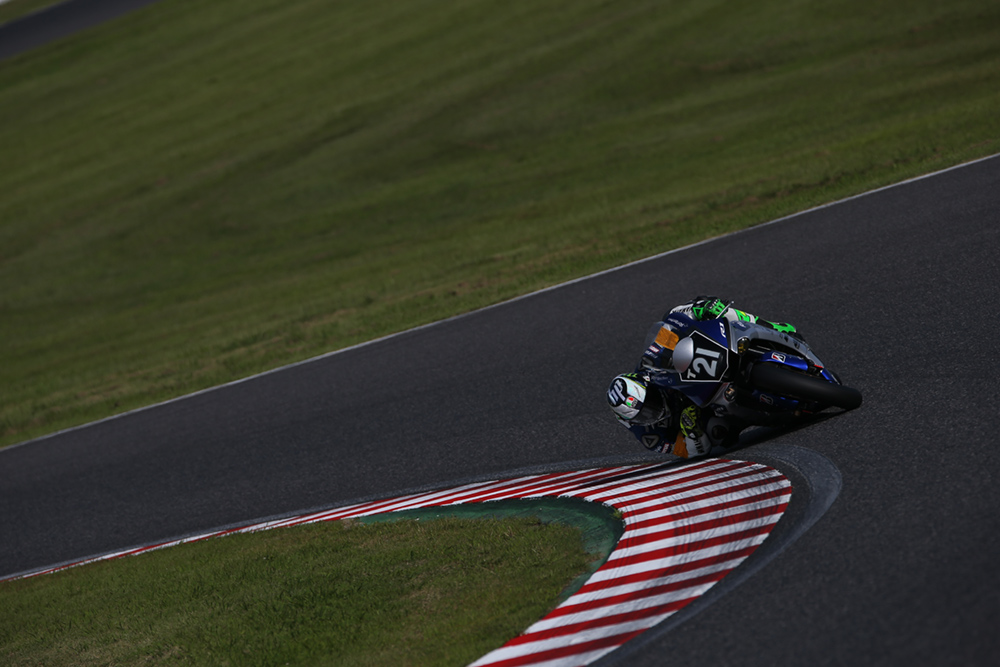 Nakasuga was in good spirits afterward, saying “Of course I'm a bit frustrated, but the important thing is that we took pole position as a team. It was an incredible performance.” Espargaró was similarly enthused as he expressed his confidence heading into the race. “My heart was racing during Nakasuga-san's time attack! But I'm really happy. What's important now is that all three riders in our team are fast.”

The Suzuka 8 Hours main event was set for Sunday, July 26th. The race would prove to be extremely eventful, with race incidents bringing out the safety car six times in total.

The race got underway at the appointed time of 11:30 in the morning, but Nakasuga, tasked with riding first, couldn't get the engine started in time and dropped the team down the order on the first lap. But by lap 14 he had caught up, slotting into 3rd position and putting on a fine display of fuel-conservative riding as he made use of his competitors' slipstreams. His plan worked so effectively that his first stint lasted 28 laps. Team Manager Wataru Yoshikawa didn't hide his surprise: “We'd decided to take it easy and conserve fuel in the first stint as part of our strategy, but to take it to this level was quite unexpected, in a good way. That's our star rider Nakasuga for you.”

Bradley Smith was up next. After swapping with Nakasuga, he went straight out and began setting solid, fast laps. With the help of a rival team's accident, Smith finally took the lead in the first corner of lap 55 before entrusting the YZF-R1 to Espargaró. The Spaniard continued the quick and steady pace at first, but trouble was around the corner. The team was handed a 30-second “stop and go” penalty for the infraction of passing while the safety car was on circuit.

But nobody in the team panicked. The bike was passed from Espargaró to Nakasuga, then Nakasuga handed the bike over to Smith, who served out the 30 seconds in pit lane. This made the battle for the lead tighter, but for the Yamaha Factory Racing Team's fast riders, it was possible to build up a sizeable lead by the closing stages of the race. At the end, Smith was forced to navigate a tricky final stint as the safety car had entered the course for the sixth time, but he was able to do so flawlessly and take the win with a nearly half-lap lead! It was Yamaha's first Suzuka 8 Hours win in 19 years and its fifth ever, having previously accomplished the feat in 1996.

Nakasuga remarked, “I didn't think we'd be able to win in our first year as a factory team. Both Pol and Bradley are incredibly skilled riders and I really enjoyed teaming up with them. I've taken plenty of victories as part of my five All Japan titles, but the rumors I'd heard that the Suzuka 8 Hours podium is the sweetest were true.” Espargaró agreed, “I'm really happy we took the win! Everybody covered for my mistake. I became close friends with Nakasuga-san and Bradley, and we wrote a new page in the history of the famous Suzuka 8 Hours event. It was awesome!” Smith echoed the others' sentiments, “I feel very honored to have taken part in this amazing project. I had amazing teammates, an amazing motorcycle, and an amazing support staff, so I'm really happy we could take the win.”

Team Manager Wataru Yoshikawa explained the keys to victory: “With the first stint it was Nakasuga's big effort that paid off. Then, when we got the 30-second penalty Pol got a bit heated, but the staff worked really well to cool him down again. Smith kept a level head when the safety car came out, riding while lying flat on the tank to save fuel, which really illustrated MotoGP riders' will to win. This year's Suzuka 8 Hours race win was all thanks to the great group of people we had and the entire team's dedication.”

*Video in Japanese only.

For the GMT94 Yamaha team, a regular competitor in the Endurance World Championship, the Suzuka 8 Hours was Round 2 of their season. They hung on to 4th place until the closing stages and were in a position to try for 3rd, but a bit of bad luck caught them out. “The last entry of the safety car onto the circuit was bad news for us. We had a 50-second lead over the 5th place team, but the timing of the safety car caused us to lose that and we ended up 6th,” explained a forlorn-looking Team Manager Christophe Guyot.

However, the GMT94 team opened the 2015 season at the 24 Hours of Le Mans with a 5th place finish and followed that with a 6th at the Suzuka 8 Hours as they racked up solid results. The team secured its first podium finish with 3rd place at the season's third round: the Oschersleben 8 Hours in Germany. Then, to commemorate Yamaha's 60th anniversary, the team ran a special yellow/black livery on their YZF-R1 at the final race of the season: the Bol d'Or 24 Hours. They finished the event in 2nd place. Unfortunately, the team wasn't able to add to their tally of championship titles, having won in 2004 and 2013, but finished the season in 2nd overall. That result, along with Yamaha's victory at the Suzuka 8 Hours, showed the world the strong capabilities of the new YZF-R1. 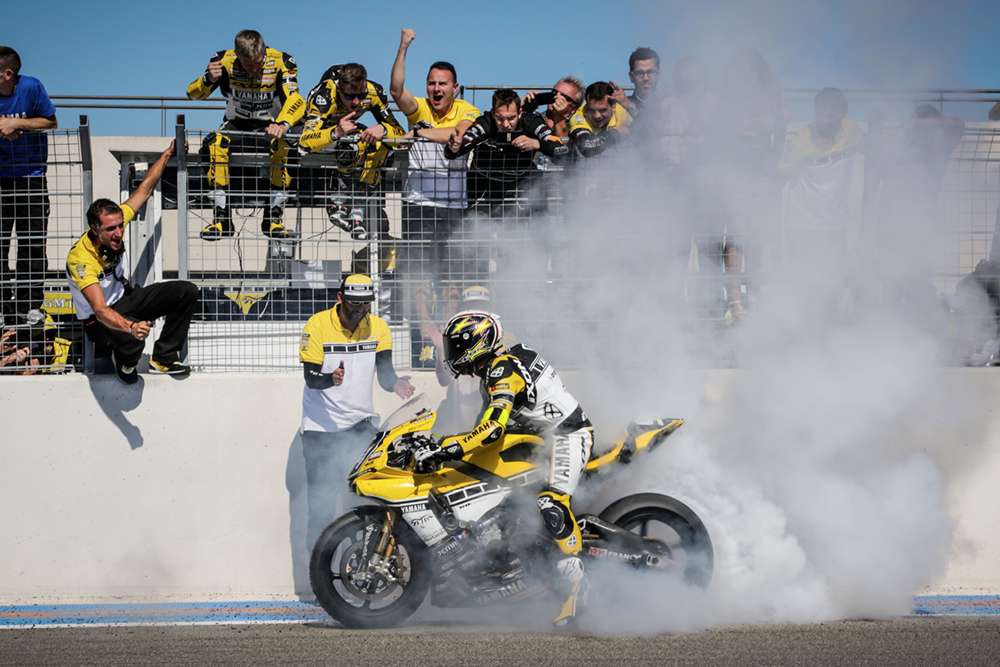